16.2 inches of snow, followed by negative double-digit wind chill - at least it's a dry wind chill - Humidity, not so much.

For no apparent reason, here is a picture of our German Shepard, Koda, as she bounds towards the swimming pool. 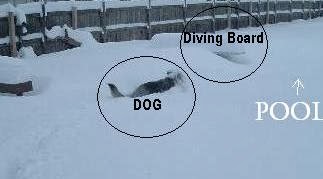 Dear Blog,
As you know, I have a day off from work today due to being inundated by 16.2 inches of the white stuff (that's "snow", not "Obama nose candy"). Attention Loan Officers: Rural Development home mortgage underwriting turn-times = +1.

I loved the snow days when I was a kid, but they're even better for the grownups! Maybe because they are so much more rare. Believe it or not, the last "grownup" snow day I received was on Tuesday, December 12, 2000, when a winter storm dumped 14 inches on the city - and THAT was when I was in the business of newspaper distribution. THAT'S RIGHT! Newspaper deliveries for a major daily newspaper (+100,000 circulation at the time) were cancelled due to weather.

Remember the old US Postal Creed: "Neither snow nor rain nor heat nor gloom of night stays these couriers from the swift completion of their appointed rounds."

NOT one of the Flint Journal's prouder moments (though they outdid themselves in the meltdown). It's unheard of for a newspaper to issue a "snow day", and we took a pretty well-deserved pounding for doing so (BTW, NOT MY CALL, and I didn't get a vote!). Keep in mind that the snow was pretty much over by that Tuesday morning, so the damage had already been done - AND The Flint Journal published in the afternoons during the week. This meant a 5PM delivery deadlline, but I'm sure subscribers would have given us a break on being a little late as opposed to not publishing a newspaper at all.

We had our carriers deliver a Tuesday edition with the Wednesdays edition in hopes we could minimize the subscription credits (and add to the ABC audit). When I say "Tuesday" edition, it was really a bonus Wednesday paper, but with the Tuesday date below the masthead. While credits were substantial, a tremendous amount of subscribers were very forgiving to us.

While I didn't look exhaustively for story links related that event, I was only able to find this short blurb (from nebraskaweatherphotos, via weather.com and AP)


OK, full disclosure, I was not one of the few who made it in to the office that day, but I would have - had it not been closed. I was still shoveling my car out of the drive when the publisher made the call. As you can see, I deleted his name from the story, just cuz. I actually liked the man. He is in another business now, as are we all (almost). The Flint Journal still publishes a few days per week, but that is a whole other story.
Posted by DaBlade at 10:31 AM