Trump on Women Who Have Abortions: Go After Their Families?

Texts From Newt with the help of  iphonetextgenerator.com

CHATTERING TEETH NEWS - Donald Trump said Wednesday that he would kill the families of the women who had abortions  because he's very pro-life, Okay?

"Excuse me," said Trump. "I have to take this text from Newt, my unofficial behind-the-scenes establishment policy advisor."

Trump pulls out his cell phone, which looks as large as a wall-mounted flat screen TV in his tiny little baby hands, and reads... 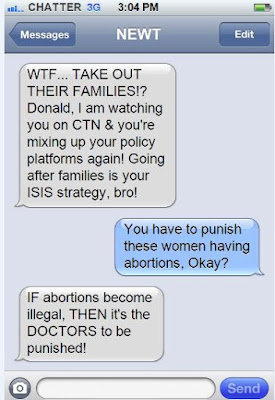 "I didn't say we would punish these women," contradicted Trump. "Listen, I love women, believe me. These women are tremendous, Okay? But these doctors who are chopping off heads, they are the ones we should be waterboarding, Okay?"

So you would allow U.S. interrogators to waterboard physicians?

"And a hell of a lot worse than waterboarding,” said Trump. "And so much worse and much stronger. torture works. Believe me, it works. Okay?"

The reporter begrudgingly agreed with Mr. Trump after having 3 fingernails removed.

"Excuse me," said Trump. "I have to take this text from Newt." 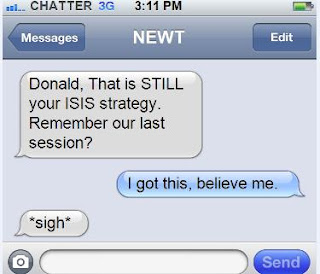 "So just to recap," said the CTN reporter, as he bandaged his bleeding hand. "You would allow the torture of doctors and the killing of their loved ones?"

"Frankly, it will never happen, Okay? Killing the families of the women who had abortions is a THREAT that if they don't behave, if they don't follow the rules and regulations so that we can have it equal on both sides, THEN we will kill them,” Trump said. 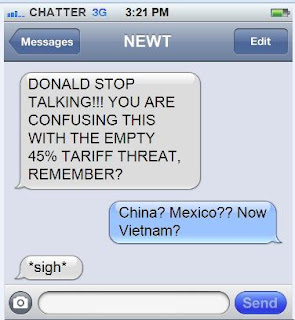 Frankly, I was wrrr... wrrr.. not exactly right.


"What I will do is build a tremendous wall around these women's uteruses," said Trump. "It will be a big, beautiful womb wall, believe me. And I will get the doctors to pay for it, THAT I will tell you!"