The Hollywood Reporter has the best headline on this story: 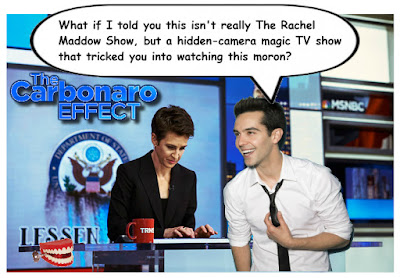 Michael Carbanaro: What if I told you this isn't really The Rachel Maddow Show, but a hidden-camera magic TV show that tricked you into watching this moron?

BTW, The Carbonaro Effect is one of my family's favs. Getting this dude's audience numbers into triple digits would be his greatest trick ever.
Posted by DaBlade at 8:09 AM