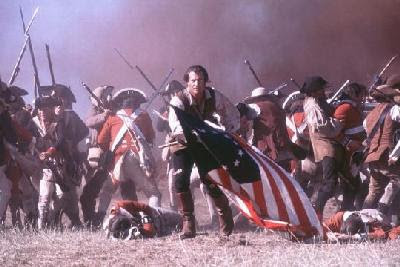 Happy Independence Day! I just thought I would share what I've been reading and hearing recently on patriotism.

You'll notice Barack Obama is now wearing a flag pin. Again. During the primary campaign, he refused to, explaining that he'd worn one after Sept. 11 but then stopped because it "became a substitute for, I think, true patriotism." So why is he back to sporting pseudo-patriotism on his chest?

Definitions of patriotism proliferate, but in the American context patriotism must involve not only devotion to American texts (something that distinguishes our patriotism from European nationalism) but also an abiding belief in the inherent and enduring goodness of the American nation. We might need to change this or that policy or law, fix this or that problem, but at the end of the day the patriotic American believes that America is fundamentally good as it is... The notion that what America needs is a redeemer figure to "remake" America from scratch isn't necessarily unpatriotic. But for lots of Americans who like America the way it is, it's sometimes hard to tell when it isn't.

Quotes from Jason Lewis in the opening monologue as guest host Thursday on the Rush Limbaugh radio program:

Think about this for a moment. The Russians had patriots, if patriotism is defined as serving the state - loving one's geographic borders - your country. The Germans had patriots. Imperial Japan had patriots. They would die for their country... They were patriots right? No they weren't, not in the context of the American experiment. Everyone lauds John F. Kennedy's speech - his inaugural address. "Ask not what your country can do for you, ask what you can do for your country". Kennedy had it wrong on both counts...

Why are they talking about patriotism on the left? Why is Barack giving this speech? Why do you hear all this talk about national service being patriotic? Because they want to redefine patriotism. They want to redefine it meaning that we are going to be wards of the state, and you're highest goal is to serve the government. Now they'll say "the community" they'll say their fellow man but what they mean is the government.

Ron Paul (?) No I'm not a Paulnut. He's wrong about many things, even in this link. But like the "stopped clock" and the "blind squirrel", he has this part right:

The true patriot is motivated by a sense of responsibility and out of self-interest for himself, his family, and the future of his country to resist government abuse of power. He rejects the notion that patriotism means obedience to the state. Resistance need not be violent, but the civil disobedience that might be required involves confrontation with the state and invites possible imprisonment.

So is "service to the community" a bad thing?

"Give to Caesar what is Caesar's, and to God what is God's."

The Pharisees posed to Jesus a question about whether it was lawful to pay tax to the emperor or not. The Pharisees asked the question with the intention of tricking Jesus into a statement of sedition against the Romans or a statement in violation of Jewish law. But Jesus’ response was to ask those assembled about how the tax was paid. When presented with a Roman coin, Jesus asked whose head was on the coin. The response was, “Caesar.”

Leftists would say that this is proof that even Jesus is against the Bush tax cuts, and that these "tax cuts for the rich" should be allowed to expire so that we all can once again, "Give to Caesar what is Caesar's." I would argue that "community service" and service to our fellow man is our obligation falling under the domain of God, not the government. Sometimes it's hard for liberals to make that clear distinction. Forced servitude to the government is slavery, not patriotism. Confiscatory taxes for socialist programs under the guise of patriotism does not belong to Caesar.
Posted by DaBlade at 8:16 AM