Yes I know I am a week and a half behind times, but this local story first hit the news during my Disney vacation. Besides, that's a pretty funny headline. I couldn't help myself.

This, from the FJ July 3rd follow-up:

(Acting Flint Police Chief David) Dicks told The Flint Journal last week that Flint police will begin arresting people whose pants or shorts droop too low, exposing their hind ends. He said the enforcement is in response to "significant'' complaints from citizens.

This new law enforcement priority has brought a variety of responses.

To some, who view sagging as nothing more than a ridiculous fashion fad that will eventually fade away on its own, the chief's pronouncement is the kind of silliness that once again has made Flint the butt of jokes, so to speak.

I love a good pun. I even like the bads ones. The point is, the crack problem is finally being addressed in Flint. After all, everybody knows that OUR generation NEVER did, said, listened to, or wore anything our parents found objectionable. (insert your own memories of your own 70's wardrobe, hairstyle and 8-track collection here).

"At least our generation didn't participate in indecent exposure", you might say. And I would have agreed with you until the aforementioned Disney vacation...

Disney's "Tower of Terror" (Part 2)
My one and only blog entry regarding the bedbug problem my family encountered at a Disney resort failed to mention the most humiliating and embarrassing episode resulting from this problem. I made the mistake of telling this story to friends and relatives (and brother Snapper), all much to their amusement. Snapper threatened to post his version first. Since it happened to me (and there is a loose tie-in to the "baggy Drawers" story above), here goes.

The "down and dirty" version...
It's one o'clock in the morning. The exterminator has already verified the bedbug infestation and alerted the resort authorities. My wife was shuttled to the resort gift shop via golf cart driven by the night manager. Her mission was a simple one. Pick out sleepwear items for the family. We were being moved to their very last available room in a late night evacuation and we had to leave all of our clothing behind. When she returned, she passed out a Mickey T-shirt and a pair of bright red Goofy boxer shorts to my boys and me. I pulled them on (barely). I was sure that Tina had mistakenly given me Josh's (my 13-year-old) boxer shorts. Alas, no.

"Where's my double Buddhas?," I inquired.

"The store was dark and this was the best I could do!," she answered. 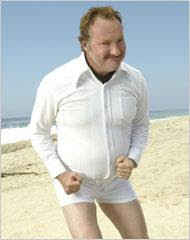 Oh well. It's now the middle of the night. No time to be modest, for everyone is asleep. "Except for the night manager, who is about to get a thrill of her lifetime," thought I at the time. Fast forward. It's 9am the next morning, after having spent the last half of the night in our new room. Our clothes would not be returned to us until 5pm that evening, after the high temperature dry cleaning/bug exterminating proceedure. We had most of the day to spend at the resort, and I planned on drinking (and scratching myself) heavily at the pool. I looked down at my skin-tight Goofy boxers. Wearing these in public would get me arrested in 38 states, but I was determined to walk the half mile walk to the store to grab some pants. I steeled myself, opened the door and was met with sunshine and a bustle of tourists going this way and that. I walked along the canal... walked over the bridge... into the lobby - all the while averting making eye contact with the minions I was passing. I had to be quite a sight. Think Larry Bird (per Greg) or Cousin Eddie (per Cartman). I pretended that I was a European visitor that was wearing the usual attire from his home country. Finally made my way to the back of the store to a pair of khakis and a new T-shirt.


Dooney Da Priest's rap hit, "Pull Your Pants Up!"
Be a real man.
Stand up.
Is that your underwear man?
Pull your pants up!