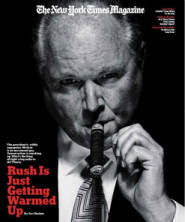 According to Drudge: (I love this part) "Earnings now pace him ahead of the annual salaries for network news anchors: Katie Couric, Brian Williams, Charlie Gibson and Diane Sawyer — combined!"

He's still under paid if you ask me.

Liberals are beside themselves. Vanity Fair contributing editor Michael Wolff had this to say about the Limbaugh deal: “I think it’s a monster error,” Wolff said. “I know – I’m sitting here saying, ‘What are these people smoking?’ You know, the truth is that Rush Limbaugh has been – he’s ridden the rise of conservatism for 25 years and I don’t, maybe nobody quite, quite has been following the news, but that’s coming to an end.” (link via Hot Air)

Conservatism is "coming to an end?" Dream on pal. For the record, I've never heard of you.
Posted by DaBlade at 8:17 AM