From the email inbox:(thanks Shang)
In honor of the mother of the octuplets, Denny's is offering a new breakfast meal:
The Octo-Slam - You get fourteen eggs, no sausage, and the guy next to you has to pay the bill.

and then there are the fish stories.

Staff at the Santa Monica Pier Aquarium in California say they have identified the "trickster" who flooded and damaged their "ecologically designed floors":

They blame the soaking they discovered Tuesday morning on the aquarium's resident two-spotted octopus, a tiny female known for being curious and gregarious with visitors. The octopus apparently tugged on a valve and that allowed hundreds of gallons of water to overflow its tank.

Aquarium spokeswoman Randi Parent says no sea life was harmed by the flood...

Well la-de-da! What a relief, 'cuz the first thing I worried about when I read this story was if all the little gold fish and sea urchins were unharmed. *sniff* They made it! *sob*

First off, what is an "ecologically designed floor"? It's dirt, right? So their dirt floor suffered water damage in this unsuccessful prison break attempt? And as for no sea life being harmed from this eight-legged SOB's little "prank", I'd ask, "why not"? If I'm running this joint, the first thing I'd do is spring for a tiled floor and raise ticket prices a buck or two. The next thing I'd do is add calamari to the cafeteria menu this week.

"Isn't calamari a dish made from squid, not two-spotted octopis?"

Right you are, mister "cephalopodologist"! However, never forget that "revenge is a dish best served cold", and in this instance, revenge is made from the filleted tentacles and beaten and tenderized carcass of a certain little "trickster" that forgot it's place. Namely, to swim around the tank entertaining the paying customers with an occasional ink spray or two. Let that be a lesson to the rest of the little fishys. There is a new sheriff at the Santa Monica Pier Aquarium and Sea Food Bar and Grill! Tomorrow's special: Waterboarded Tuna on rye, and "I found Nemo" Clown Fish pâté.

Immediately upon reading this story, I did an exhaustive 2 or 3 minute google search hoping to find a PETA response. What I found instead was a similar story from November of last year involving a talented octopus in a German aquarium.
"You've Been Punked! By an Octopus"

When employees at the Sea Star Aquarium in Coburg, Germany, were puzzled by the constant short-circuiting of lights, they thought it was a result of technical difficulties. It turns out, however, that Otto the octopus was just trying to get the irritating light turned off...

I am not surprised that it took the German investigators three days to solve this case. I've watched every episode of Hogan's Heroes in my youth and, no offense to the German people, but if Colonel Klink, Schultz and General Burkhalter couldn't find those underground tunnels, they definitely would be outsmarted by a hermit crab juggling Octopus.

I've attended many animal shows at theme parks - Everything from trick performing dogs, cats, ferrets, birds, seals, walrusses, dolphins etc., etc. However, I've NEVER seen an Octopus juggling hermit crabs. Otto needs to be the headliner for this aquarium, like Shamu is for Sea World. Give Otto his own aquarium at center court, complete with stadium seating. You could even have the splash zone marked off to warn folks with ink allergies. This theme park could be called... 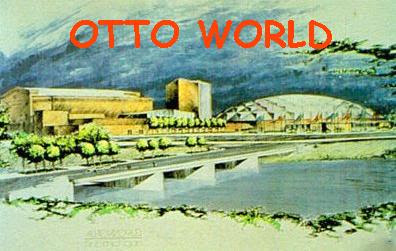