In the "ALTERNATE UNIVERSE" department, I ask, "What if the ultra-wacko gals from CODEPINKO finally realized the hypocrisy of their militant anti-war (especially in the defense of this country) and pro-abortion (advocating unrestricted access to taxpayer-funded abortion-on-demand).

Notre Dame's invitation to Pro-infanticide president Obama has resulted in a constant stream of demonstrators getting arrested. The latest batch of protesters in defense of human life finding themselves "cuffed and roughed" were ladies from the pro-life group CODEPINK.

The CODEPINK ladies carried a lengthy sign that read "WE WILL NOT RAISE OUR CHILDREN TO KILL ANOTHER MOTHER'S CHILD". 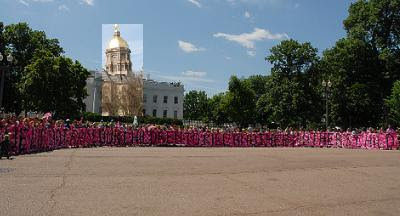 When asked for clarification as to the meaning of this message, the spokeslady for the group stated, "It used to mean that our children would never become soldiers in the defense of this country under any circumstances, and that we would have been 'tickled pink' if our sons instead had become gay Miss America judges who threw hissy fits at conservative babes. Now that our pyschotic out-of-control progesterone levels have been brought under control, we now realize what a horror the so-called 'pro-choice' movement really is. So when we say, 'WE WILL NOT RAISE OUR CHILDREN TO KILL ANOTHER MOTHER'S CHILD,' it refers to our refusal to allow our children to grow up to become abortion doctors in this obamanation.

Only slight changes necessary for CODEPINK to come over from the dark side.

"Arise then...women of this day! Arise, all women who have hearts! From the bosom of a devastated Earth mother and child, a voice goes up with Our own. It says: Disarm! Disarm! LIFE! LIFE!"— Julia Ward Howe, Mother's Day Proclamation, 1870 Chattering Teeth, ND Commencement Day Proclamation, 2009

This Mother's Day Commencement Day, we held our second 24-hour vigil in front of the White House Golden Dome, where we honored all mothers and women who live where war abortions are happening— where women and their babies are paying the price with their bodies, loved ones, homes, future. We wanted to recognize the price they pay and honor their courage and power, by standing with them in solidarity to not only tell their important stories but to model what women-centered community looks and acts like.

We continued our call for our troops Obama to GO come home from Afghanistan and Iraq Notre Dame so that no more mothers will suffer the unbearable grief of losing a child to these wars Godless Liberals. And with your help, we have also sent a message of sorrow, friendship and peace directly to the women suffering in occupation from the democrat party and their families.

OTHER "MUST SEE" ALTERNATE UNVIVERSES

iOWNTHEWORLD.com
The Wanda Sykes Obama Roast (if she wasn't a sycophantic toady.)

HOTAiR
Transcript of Obama’s WHCD Speech from an Alternate Universe Where He’s Capable of Making Fun of Himself and Not Just Taking Thinly Veiled Shots at His Detractors
Posted by DaBlade at 9:02 AM