Bogus conversations in my fertile mind

Obama's supreme court nominee Sonia Sotomayor on judicial prudence:
I would hope that a wise Latina woman with the richness of her experiences would more often than not reach a better conclusion than a white male who hasn't lived that life."

Sotomayor: I was talking about Joe Biden there. C'mon now. Everybody knows he is a few hair plugs short of a full pate. The "JOBS is a 3 letter word" guy. I was being kind with the "wise Latina women" comment. I could have said Joe didn't have the intellectual range of a transgenic monkey.

Biden: What's a cross-dressing ape got ta do with it? One cross-species wardrobe exchange during my college days and now ol' Champ is labeled?

Gingrich: A racist Latina woman should have to withdraw.

Robert Gibbs: Careful! Measure those words carefully!
Ross Perot: Measure twice, cut once. Don't piss off those mexicanos Newt, or all you'll hear is a great sucking sound...
Bill Clinton: I didn't know that Monica was a salsa chick, but she knows her way around a Cuban cigar.

Janet Murguía, president of La Raza.“If there is the perception that somehow she (Sotomayor) is being treated unfairly or they are distorting her record or comments, I think there will be a backlash in the Latino community... There could be great resentment within the Latino community if it is seen somehow that she is not being treated with the respect due to a Supreme Court nominee.” 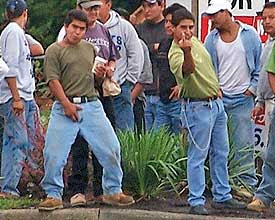 Clark Griswold: "Come on, honey. We can't close our eyes to the plight of the city! Kids, you noticing all this plight?" "Roll 'em up!" "Excuse me, holmes?"


Julianne Malveaux, African-American economist and president of Bennett College, made headlines on November 4, 1994, when she said this of Supreme Court Justice Thomas: "I hope his wife feeds him lots of eggs and butter and he dies early like many black men do, of heart disease."

and what does Malveaux think of Obama's latest nomination to the court?

Malveaux: I hope she eats A healthy, delicious and festive Latino menu specific for diabetics and stays healthy through the triangle of proper foods, exercise and medication. I hope she doesn't die early from beef tacos, wet burritos, or a late night knife fight like many overweight Latinos do.
Posted by DaBlade at 7:28 AM