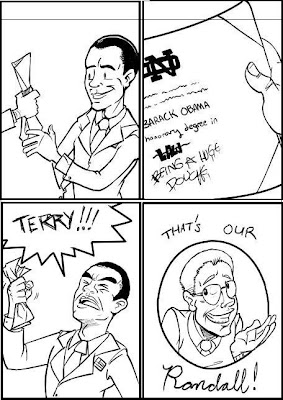 Original artwork from my ND son who whipped this up on a drawing pad connected to his laptop. (I screwed up the cut and paste job, as his comic had the 4 panels in a row - which would not have fit on this blog). So in conclusion, he is an artist, a musician (guitar, cello, awesome vocals), a classroom prodigy, and a stud. He also doesn't like me bashing his school, although he never says so. He was arguing via Facebook chat with an old high school buddy the other day, talking out loud as he was hitting his keyboard keys with authority. "I dare anyone to sit in a mass on any given Sunday at my dorm and try to tell me Notre Dame isn't Catholic!"

He knows it's an imperfect institution, but is very protective of what's good about "her". I wouldn't want it any other way. After all, It's like-minded young people like my son who ultimately will make the necessary changes (not some old guy bitching on his blog every day :)
Posted by DaBlade at 7:18 AM