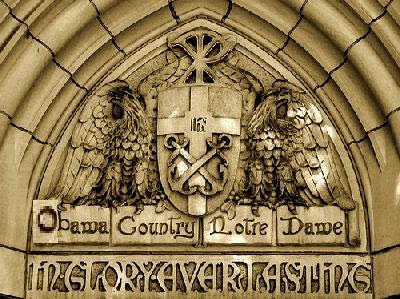 Not really, but my cheap cut-and-paste job more accurately reflects the universities' and U.S. Catholics' priorities.

PRO-LIFE ACTIVIST ARRESTED FOR PROTESTING INFANTICIDE ON THE GROUNDS OF NOTRE DAME
This, from a so-called "Catholic University?" Arrested was none other than Randall Terry, Founder of Operation Rescue. What is he guily of? Take a look.

“Stop Obama at Notre Dame”
Our Mission:
1) Stop President Obama from Speaking at Notre Dame on May 17 by peaceful protests;
2) The dismissal of Rev. Jenkins as Notre Dame President.
Our Secondary Mission:
1) If Obama decides to run again in 2012, we have politically tarred him with the blood of babies in such a way that he cannot win;
2) Create such peaceful havoc that no other Catholic University commits this treachery;
3) Recruit and train new warriors to defend Life and Truth in “on the job” training.

This is blasphemy against The One, the most high Lord Barack Hussein Obama! The state has incarcerated Mr. Terry, while at the same time Obama works to release the terrorists from Guantanamo.

CAFETRIA CATHOLIC: A Catholic will pick and choose what he/she chooses to believe in in regards to the faith. Typically they will deny or mutilate revealed truths in order to justify their sinful lifestyles.

Sometimes they are even priests. 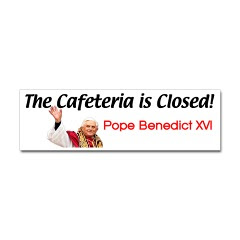 Mrs. DaBlade:
Finally a true Catholic says no to Notre Dame President Father Jenkins. Mary Ann Glendon, a pro-life Harvard Law professor and former ambassador to the Vatican, had previously accepted an invitation to receive the prestigious Laetare Medal. This award has been given to American Catholics who have illustrated the ideals of the church and enriched the heritage of humanity since 1833. An inscription on the Laetare Medal reads “Magna est veritas et prevalebit,” which means “Truth is mighty, and it shall prevail.” The hypocrisy of this award being given the same year that Barack Obama speaks at the University was not lost on Mary Ann Glendon.
Posted by DaBlade at 8:54 AM