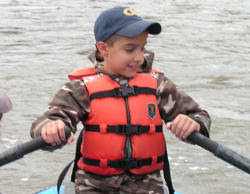 PICTURED: Meet Samuel Armas. He is a strong and healthy 9-year-old boy who lives with his family in Georgia. His mother Julie says that Samuel has a "very strong sense of right and wrong”. Is there is something about Samuel that looks vaguely familiar?

Look closely at those hands. Chances are, you've seen one of them before in his first baby photo. Samuel was only a twenty-one week old fetus who had just had successful surgery in utero. After the surgery, but before the C-section incision was closed, little Samuel must have decided to thank his doctor. Out pops Samuel's hand and closes on the doctor's extended finger for the now famous "hand shake".

It's almost as if Samuel was saying from his mother's womb, "Samuel Armas here, good to meetcha doc! I appreciate what you've done for me here. Don't take this the wrong way, but it's getting a lttle drafty in here. Can you close me in for another 4 or 5 months? I promise, we'll catch up then over lunch. Have your people call my mother."

That Little Hand from the Womb: Samuel Armas still Reaching Out for Life

In the propaganda war which has sadly convinced many that dismembering children in the womb - or killing them through chemical strikes - is some form of “health care”; it communicates the truth by exposing the evil behind every procured abortion.

Mister president, at what point does a baby deserve human rights?

OBAMA: “Whether you’re looking at it from a theological perspective or a scientific perspective, answering that question with specificity … is above my pay grade.”

You, sir, are an Obamanation and a disgrace.

Do yourself a favor and visit the photographer's home page
www.michaelclancy.com
Read his "first-hand" acccount (pun intended) of the tense surgery and how he got the shot he titled "Fetal Hand Grasp". Watch the sequence of stills of this event, but have some tissue nearby. It will take your breath away.

"As we enter into Mothers Day weekend we need to remember the women who were lied to concerning what really occurred in the Abortion they had. These mothers continue to suffer and are also victims."
Posted by DaBlade at 7:07 AM