I'm breaking my paranoid Detroit Red Wings hockey jinx rule and going out on a a limb here to state my prediction on the eve of the Stanley Cup Finals 2009. Wings in four. There, I said it. Did it make you cringe Shang? Not only that, I am going to leave the 9" black and white dark and treat myself to the game on the large cinemaview LCD in the family room. I am going to do so with an arrogant confidence that nothing can derail my beloved Wings in their quest for their fifth Cup in the last 12 years, and their second back-to-back in that string.

Why tempt fate, DaBlade? Your Red Wings are on a roll for cryin' out loud! Didn't they sweep the Columbus Blue Jackets, handle a very talented and physical Anaheim team in 7 games, and dominate the Chicago Black Hawks in 5 games for the conference championship?

Exactly. They have lost 5 out of their last 16 games and I find this dismal performance simply unacceptable. Besides, this is a rematch with that same team they slapped around last year to lift the Cup. A team that is named after pudgy flightless water fowl no less. A fitting mascot for the likes of Cindy Crosby. Maybe the Mule will remove his mouth guard if he misbehaves, as he did with Kane in the last series.

Besides, any city that is proud of this... 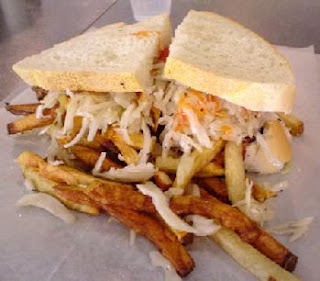 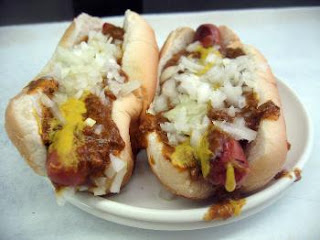 Two Lafayette coney islands. This platter is a tasty cardiological disaster and the pride of the city. Obama may have wrestled control of GM, but just let the POTUS POSSEE near this cherished establishment and you will see true anarchy in the streets. Tiananmen revisited. My chiseled frame would single-handedly stop a tank intent on moving on this coney dog heaven.

Bring it on! A win today and tomorrow, then it's two pickets to tittsburgh for the sweep!
Posted by DaBlade at 3:06 PM