Sit on it Jenkins!

I know I seem fixated on this whole Notre Dame/Obama controversy, but I guess it has me torque off. I'm sure I will move on to other areas of interest after he gives his little speech on May 17th.

PICTURED: Notre Dame University replaces the statue of the Virgin Mary atop the Goldem Dome with that of a large Obama Chia Head in honor of the presidents' commencement visit. 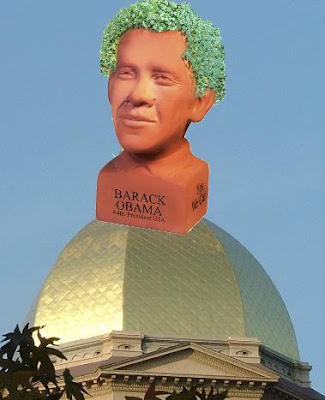 The president of Notre Dame, Father Arthur Fonzi... I mean Father Jenkins, met with an ND alumni group and defended his decision to invite Obama to speak at this year's commencement. [source]

As he has repeatedly stated publicly, he reaffirmed that The University of Notre Dame is unequivocally and firmly committed to the Catholic teachings about the sanctity of life, and the protection of life. Father Jenkins stressed that Notre Dame’s fundamental commitment is to God, but the University also has a tradition of expressing respect for the political order by offering the elected leader of our nation an honorary degree.

I am sick and tired of this push to water down what should be absolutes. Jeb Bush said Saturday that it's time for the Republican Party to give up its "nostalgia" for the heyday of the Reagan era. Should Catholics do likewise and give in to the desecrators of life? What do you say Jenx? Should Catholics stop being "nostalgic" for the heyday of the era of the sanctity of life? Thank goodness Jenx wasn't around for input on the Declaration of Independence, or it might go a little somethin' like this:

"...We hold these truths to be self-evident, that all men are created equal, that they are endowed by their Creator with certain unalienable Rights, that among these are Life, Liberty and the pursuit of Happiness... BUT I don't want to be rude, so all of these terms are negotiable."

QUESTION: "What was with the Arthur Fonzarelli reference?"
ANSWER: Just like the Fonz, Jenx just can't seem to say he was wr-wr- wr... wro... wrrrrr... WRONG! Other than that, he has more in common with Potsy throwing airballs over the backboard. Yes, it's true I loved Happy Days. Look for the Fonz stutter at 1:40ish: