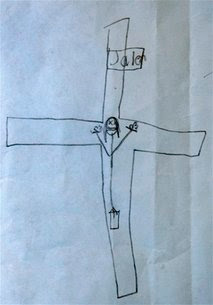 TAUNTON, Mass. – An 8-year-old boy was sent home from school and ordered to undergo a psychological evaluation after he was asked to make a Christmas drawing and sketched what appeared to be a stick figure of Jesus on a cross, the child's father said Tuesday.


I agree an injustice has been done here, however it is the so-called art teacher who needs immediate disciplinary action. Has this (tongue twister alert) Taunton teacher not taught the basic principles of scale and depth? Not that the kid doesn't need severe discipline also. The Crucifixion is an Easter story young man! *Ruler Whack on hand*

Tonight the superintendent of Taunton Public Schools, Julie Hackett issued a statement in response to the father's allegations:

"It has been reported in the media that a student was suspended over drawing a rendering of Jesus Christ on the cross. This report is totally inaccurate..." We mistakenly thought the kid had drawn Obama on the cross. When we think "Deity", we think Obama.

“Is this the season of joy or oy?” said Rabbi Alfred Benjamin of Temple Shalom in Milton.
Posted by DaBlade at 7:42 AM