OK, as far as I know, my blog headline is a complete fabrication. But who knows? Ted Williams is certainly a "from rags  to riches" story... He himself went from a crack head into a successful businessman (Obama to Romney transformation)... He could speak to the millions of unemployed Americans and give them hope with his "What a difference a year makes” story.


You Know you love it!

CONVENTION UPDATE
Wow! Ann Romney was great. All the speakers delivered. Fantastic kickoff to the convention. That's all I have time for this morning, as I have to pack a bag, don a disguise, hop the back fence and take a clandestine flight. I'll tell ya about all that later.


Who Is GOP’s Mystery Speaker Thursday night in prime time who is listed as “to be announced”? 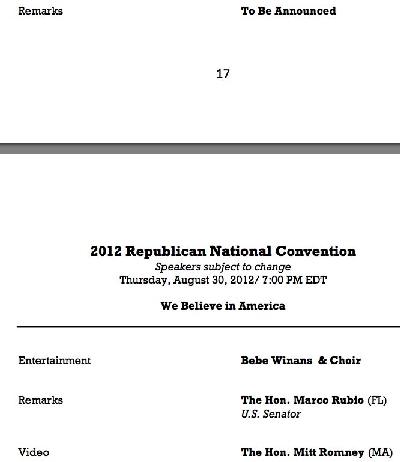 Whenever I go to an event, I always take a look at the lineup and make my plans accordingly. I'm not there in Tampa, but if I was, I'd schedule my bathroom break during the Bebe Winans Choir thingy. No offense to Bebe, or his/her? choir. I'm sure they sing lovely. It's just that there is a lot of buzz and buildup on the identity of this mystery speaker slot and I surely would not want to miss that. Hopefully there will be speakers in the bathroom piping in Bebe and company's melodies for those like-minded folks answering nature's call.

Remember, the Romney campaign was able to keep the VP selection secret by having Paul Ryan sneak out through his backyard wearing a cheesehead or something - So I'm sure they can keep my identity uhhhhh ummm... I mean the mystery speaker's identity a secret.

Also popular choices are 82-year old actor Clint Eastwood and one hundred twenty something Nancy Reagan. I love them both, but they would not wow the younger folk.

I don't think the mystery guest will be Pope Benedict or Kid Rock, nor will it be Helen Thomas or Michael Moore (Though I would be fine with all of those selections. The last two would be examples of "let them talk" to expose their folly). If that was the goal, just put Joe Biden "back in chains and anchor him to the podium, tell him he's at a Obama fundraiser in West Virginia and get out of the way of his unleashed pie hole.

If I was planning this, I'd want a little comedy thrown in. We have to laugh, right? I might have Punxsutawney Phil ride out strapped to the back of a jackass (the official democrat mascot). The groundhog would play the part of Joe Biden (no stretch for any rodent) and donkey would be obama of course. They could stand on stage while actual obama/biden soundbites were played over the convention speakers. Then Ann Romney's Thoroughbred Rafalka would chase them off stage. Like it?

Well, my fake mustache is dried and I have a plane to catch. Stay tuned!