Obama on the Politrickin' trail

President Obama took a seat by the window of Air force One, as was his habit, so he could read about himself in natural light. The flight was going to be a short one and he was looking forward to that afternoon's day of golf. "I haven't had a vacation in over 10 days!," he pondered to himself.

He scanned the headlines for articles that mentioned his greatness. It didn't used to be this hard. His handlers were careful to go over each newspaper beforehand and black out any mention of his opponent's success, or the rare occurence of Obama's own negative press. It seemed each day's edition was marked up more than the last. 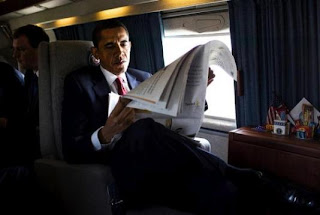 As the plane reached cruising altitude, Barack's eye was drawn to this headline:

Startled, he began to read...

The U.S. Anti-Doping Agency erased 14 years worth of Barack Obama's high school and college career Friday - including his alleged degree from  Columbia University and Harvard Law School. But the USADA didn't stop there. They stripped him of his Nobel Peace Prize, and court ordered him to hand write refund checks in the amount of $1.09 from his own personal account to every disgruntled customer from the Opti-grab bailout failure.

He is now officially a drug cheat in the eyes of his nation's doping agency - and by the majority of voters, who look to strip him of the presidency this November.

Barack's longtime spiritual advisor, Reverend Wright, came to his defense and said he was the victim of an unjust legal case. "Where is the evidence that Barack was doping? This is nothing more than a witch hunt and the USADA just be ridin' dirty!"

A reporter from Chattering Teeth blog pointed out to reverend Wright that the evidence was in Obama's own spoon-fed words in his ghost-written autobiography, Dreams from My Father:

"I had learned not to care. I blew a few smoke rings, remembering those years. Pot had helped, and booze; maybe a little blow when you could afford it. Not smack, though. Didn't like the smack causin' me to shake like a faulty engine, and I never could get the tubing and needle to cooperate with my skinny ass arms."

Suddenly, Airforce One hit an air pocket momentarily jarring Obama awake in his airplane seat. He looked down at the newspaper lying open on his lap. He had fallen asleep while reading the latest news story about Lance Armstrong being stripped of his Tour de France titles by the USADA for accusations of doping.
"It was all a dream," the president said with relief. "This story isn't about me!"
Of course it's not mister president. Lance still has one testicle while you remain ball less sir!