Swedish designers have done it again! First, there was the Swedish meatballs invention. Then came the Swiss Army Knife. Now comes the greatest human achievement so far this century - 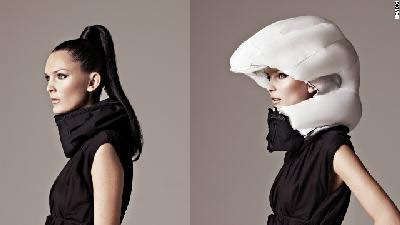 "...the blow-up helmet is housed in a pouch that, when wrapped around your neck, looks a little like a puffed-up ski-jacket collar.

But, using gyroscopes and accelerometers and other electronic sensors, the Hovding can sense a bike crash and then immediately blow up an airbag of sorts to surround the cyclist's head."

When the sensors are triggered, helium gas is deployed to fill up the nylon bag. Creators say it takes only a tenth of a second to fully inflate.

Can't you just imagine a faulty sensor causing this thing to pop up at the most inopportune times!?

Of course, anyone goofy enough to wear this as a bike helmet would likely render the safety feature ineffective by sucking the helium tank dry within the first couple of miles. I can almost hear recordings of the Donald and Daisy Duck 911 emergency calls now.

I can only hope that engineers are working on full body airbags and that these suits will become mandatory citizen uniforms in a second Obama term.


The gal in the inflated helmet reminds me of one of them zombie head crabs who run around in Half-Life II, my favorite PC game of all time. BTW. Hey Valve! When is Half-Life 3 going to finally be released?