I don't know about you, but With the economy in shambles, the unemployment rate over 8% (even with funny math) and With over $5 trillion dollars in new Obama debt - I take great comfort in the knowledge that... SOMEHOW, SOMEWHERE, a team of genealogists working tirelessly around the clock may FINALLY show Obama indeed has slave blood. We're saved! 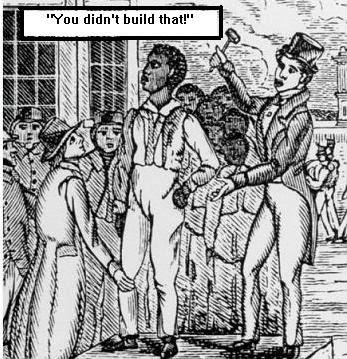 The Premise: Obama is descended from "...John Punch, an indentured servant who was sentenced to a life of slavery after an unsuccessful escape attempt in colonial Virginia."

"We have two of the most significant Africans in our country's history being directly related to each other," Joseph Shumway, an Ancestry.com genealogist, told CNN.

Why, if this is true, it will go down in revisionist history as the most spectacular and uplifting event in our nation's history! EVERYONE will remember where they were and what they were doing when they first heard that Obama had slave blood! (I always knew he was legit man! Sheeeeiiiit!)

Every generation has these moments. I remember as a little boy up past his bedtime watching the first moon landing. I remember crystal clear the "where and when" moments from the Challenger disaster, 9-11, and when I first heard the Rush Limbaugh program. Events that changed the course of history.

But Obama found to be "down with the struggle" trumps them all!!! This is a watershed moment for our nation, much as the Miracle US hockey team's victory in the 1980 Olympics uplifted the pride of a nation. If there ever was a time we collectively yearned for a distraction from local and world events and a much needed shot of hope - it's now!

The U.S. hockey team's defeat of the Russian's helped this nation begin to heal, just as this news of The One's bloodline being traced back to slave John Punch (The First One) will help us get over what really troubles us as a nation now... Namely, when will Fifty Shades of Grey be released as a movie, ala Hunger Games, and what's up with Lindsay Lohan's latest arrest?

Yes, the U.S. women's gymnastics team won the gold in London yesterday. Yes, that's great! However, they weren't exactly underdogs so it doesn't rise to the same level as the hockey victory in 1980. Obviously it pales in comparison to the Obama slave blood news. Now if this were the winter Olympics, and say... we won the Curling gold? (dare I dream?)


So let's recap! You may have lost your job and joined the swelling Obama ranks of the unemployed. You may have lost your home to foreclosure. You may be scratching by day-by-day. Now you hear that Obama has legit African slave roots. Don't you feel better!? Obama (the media and the team of genealogists hope you do in November).


There is one little problem with this Barack Obama/John Punch link though. It probably isn't true.

As we read deeper into the story, we find out that researchers ran into a few minor obstacles. Namely, a mountain of records had been lost or destroyed over the last three hundred plus years. But did our little marxist researchers give up? NO! They began to fill in the blanks with deductions, opinion and concocted fantasy, damn the lack of facts! This is the same strategy used on their "news" channels, so no big stretch. 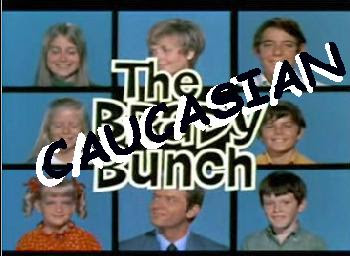 Here's the story
Of a Marxist named Barry
Who was busy destroying America on his own...

Bunch. Punch. Bunch. Punch. Hmmmm. Even you rightwingers have to admit that Bunch and Punch rhyme. And apparently in colonial times it was not unusual that the letter "P" and "B" would be used interchangeably. I think we can accurately conclude that we now know more about the birth and life of colonial slave John Punch than we do about our modern slave master Obama.


Obama does in fact have roots from the Punch family, but as it turns out - NOT the "John Punch" lineage. Obama is a direct descendant of this man, Hawaiin Punch. 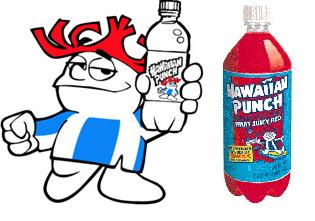 
Apparently, the John Punch connection belonged to some guy named Parack Opama from Queens. Gotta run and make my lunch. Beanut Putter and Jelly sandwich sounds good to me.
Posted by DaBlade at 7:41 AM