Will Judge Gorsuch be Borked or Filibustered? (and who's cat is this?)

The Supreme Court confirmation hearings of Judge Neil M. Gorsuch are set to begin today. He has been cramming for this senate test ever since his nomination and in prep sessions known as "murder boards" where he is peppered with questions about his record and judicial philosophy in attempts to trip him up, just like the democrats are likely to do.

I imagine these mock sessions are sort of like the practice squad on a football team, where player's sole job description is to fill in for this coming weekend's opponent during the season and to get the main team ready for live action. Remember the movie Rudy?

If it were MY JOB to prep Judge Gorsuch to be questioned by the likes of mental giants in the mold of Al Franken and Chuck Schumer, I would spare no expense and go "full immersion" by wearing a large, red clown nose with reading glasses perched low on the nose nob, a faux satellite dish on my head and a large alcoholic drink in my hand. Voila! Instant Working Democrat Senator!

Even most of his critics concede that Judge Gorsuch is wicked smart and poised, so it won't be easy tripping him up. Here is how I imagine my murder board prep session would have gone:

ME: Please state your name for the record, sir.

ME: I asked for your name, not your title. When you say "Judge", do you mean as a name like Judge Reinhold?  Is it your contention then, SIR, that you played Detroit Detective William 'Billy' Rosewood in the Beverly Hills Cop movies!? (*slamming my fist on table*) WERE YOU LYING THEN OR ARE YOU LYING NOW!?

GORSUCH: Do me a favor, can you say ‘Judge’ instead of ‘sir’? It’s just a thing. I worked so hard to get that title, so I’d appreciate it. Thank you.

ME: Oohhhh GOOD FOR YOUUUU! Giving me back a little Barbara Boxer to throw me off balance. Stick and move. Rope-a-dope. I get it. Let's quit circling the "Boxer" ring. Now that we have the niceties out of the way, let's get started...

From the democrat perspective, the purpose of this hearing is to determine whether you are fit enough to sit on the Supreme Court, and like our favorite cRa CrA justices - to not respect our constitution nor our country and make it up as you go in order to continue to enshrine our godless abortion rights laws.

We Democrat Senators are fair, so I offer you the following:

“You can say one sentence to defend yourself. If you lie we will Bork you. If you tell us the truth we will filibuster you.”

What do you say?

GORSUCH: It’s certain that you will Bork me.

At this point, I imagine Al Franken displaying a look of triumph, thinking he has out-smarted the Judge. But slowly his smile disappears as even his feeble mind begins to untie this 'liar's paradox' knot that Judge Gorsuch has tied him into. 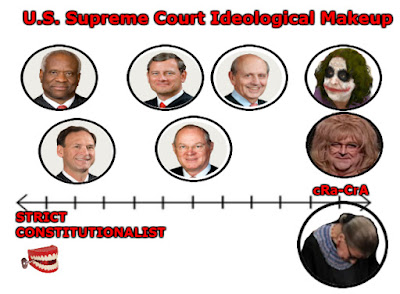