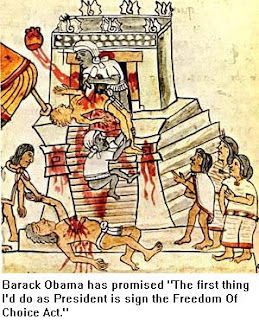 This headline makes me happy... Warm and fuzzy... giddy as a drunken sailor. I love it when the left gets tweaked. Their pain is my gain. Is that wrong? I mean, "their pain is my gain" encapsulates Obama's "spreading of the wealth" economic plans.

A last-minute Bush administration plan to grant sweeping new protections to health care providers who oppose abortion and other procedures on religious or moral grounds has provoked a torrent of objections, including a strenuous protest from the government agency that enforces job-discrimination laws.

The proposed rule would prohibit recipients of federal money from discriminating against doctors, nurses and other health care workers who refuse to perform or to assist in the performance of abortions or sterilization procedures because of their "religious beliefs or moral convictions."

Well, well, well! President Bush sticks it to the pro-death crowd and proves that this "lame duck" still quacks.

Libs over at the daily (wac)kos are crying foul and say this Bush move is comparable to when "the bell has sounded and the losing fighter takes an obvious cheap shot against his opponent."

OK, I'll stick with that analogy for a sec... "I MUST BREAK YOU!" (another quote from the veritable genius, Ivan Drago)

Barack Obama has promised "The first thing I'd do as President is sign the Freedom Of Choice Act." "YEAH!," scream The One's knowledgeable and scholarly supporters, who have no idea what THAT even is.

SIDETRACK ALERT: Obama could say anything, and his supporters would cheer wildly in their cluelessness. I picture an old Steve Martin bit mistakenly loaded onto Obama's teleprompter during the campaign, causing him to say "I'd like a shoe with cheese on it, force it down my throat, and I want to massage your grandmother." The next day, his poll numbers skyrocket.

The so-called "Freedom of Choice Act" would strike down individual states ability to put limits on abortions. Per LifeNews.com, it is "An old and dangerous bill that will increase abortions by an enormous amount... 36 states have parental involvement laws, 26 states have informed consent laws, and 34 states have funding restrictions."

SCENE: Rocky Balboa, in his red, white and blue trunks, pauses to kneel and pray before the fight.
Posted by DaBlade at 7:22 AM