Election day for a Republican in the state of Michigan feels like a lamb to slaughter. To my fellow conservatives in this overwhelmingly Democrat State of insanity Michigan, don't dispair! Sure, your vote for McCain/Palin will be buried in the sink hole of brainless emotional support for Obama, and the 17 electoral votes will all go to The One. That doesn't mean you should sit this one out!

Have some fun to stay motivated. Do what I do. I pick my "favorite" Democrat and let them know that I am officially "calling them out" and "canceling them out" with my vote. Sure it's just purely psychological, but it will make you feel better, trust me. And as a side benefit, it just may drive your liberal "friend" a little more nuts (which is just a short drive for them to begin with).

Remember the last words of a great American patriot named Nathan Hale before being executed by the British in 1776 at the age of 21:

"I only regret that I have but one life to give for my country."

I would say that my only regret is that I have but one vote to cancel out one Democrat from Michigan.

Who should I pick for this honor? Surely, this is a target-rich environment. I could easily choose local lib columnist, Andrew Heller, but I'm guessing a loyal right-thinking Chattering Teeth reader can cover me here by taking out Andy. After all, I only get to do this once.

This year I choose...[Drum Roll] 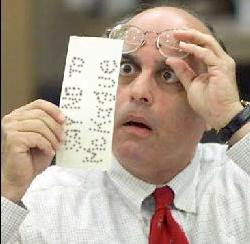 Kevin, as of now please understand that for all intents and purposes, your vote won't count. I will be casting my vote for McCain/Palin, rendering your vote obsolete. Sure, it will count in as much as your vote will also cancel out mine, but I called it first! My proactive announcement of my intention counteracts an anticipated claim on your part to this effect. Your guy will very probably win this state, but take no comfort in a delusional belief that you had anything to do with it, for I am only voting this year to cancel you out. Consider yourself disenfranchised.

I guess I am assuming that Kevin is voting (at least once) for Obama for president and that he is not writing in his long-time love interest, Michael Moore.

The only Democrat I will be voting for today will be Jim Slezak, State Representative in the 50th District. Not that I have anything against the Republican Douglas O'Neal, but I feel my vote can more effectively "kill two birds with one stone" with a vote FOR a pro-life Democrat, AND a vote NOT for Kevin McKague, who happens to be running for this seat also.

Not that I have anything personal against McKague, a truck driver by trade. We have many an interesting and enjoyable contest where I have repeatedly displayed my intellectual superiority. Let me put it this way: If I was a windmill manufacturer looking to have these beauties hauled to some gullible environmentalist's compound, McKague wouldn't be at the top of my list of potential haulers. Like most Democrats, he is a little "slow with the load", if you get my drift. He is always stopping at the truck stops to use their internet kiosks to spew his leftwing ideology while his cargo goes stale.

Why am I having so much fun with Kevin at his expense? Because of [THIS]:

McKague joined the race after the primary because he feels Slezak, who is endorsed by Right to Life, doesn't have a detailed platform and isn't a true Democrat.

If Kevin jumps into the political ring because a fellow Democrat has the cohones to proclaim he is against infanticide, then I believe this makes him fair game for my fodder.
Posted by DaBlade at 5:05 AM