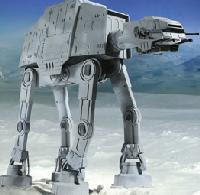 Artists in Denmark have teamed up with US scientists to create a walking house built on six hydraulic legs. They say it would make the ultimate home for beating floods or neighbours from hell, reports the Daily Telegraph.

A walking house? Is this really a good idea? I don't think so, especially in DENMARK, which just happens to be number eight on CNBC's list of Top 20 Beer Drinking Coutries. According to academic studies, Danish people have been ranked as the happiest people in the world. Carlsberg and Tuborg (89.9 liters per person) are two of (reasons why).

Hey fellas, I wouldn't leave the keys to the house with the misses if you plan on staying late at the pub. And you thought it was bad enough when you stumbled home and had to negotiate through a darkened house, hitting your shins on end tables because she had moved the furniture around on you again.

Back to the story:

The 10ft high home is solar and wind powered and can stroll at walking pace across all terrains. It has a living room, kitchen, toilet, bed, wood stove and mainframe computer which controls the legs.

This sounds like the ultimate bachelor pad! I would have mine revamped and retooled to run on good old fashioned fossil fuels. Best to be prepared for the windless and cloudy days. I can also imagine the rise of a new sport: house drag racing.

Of course, the "mainframe computer" controls would constantly have me worrying that a hacker would remotely steal my home.

"This house is not just for travellers but also for anyone interested in a more general way of nomadic living," he said.

Oh great! Ted "The Unabomber" Kaczynski roaming the coutryside in an Empirial Walker. That's all we need!

Designers say it provides a solution to the problem of rising water levels as the house can simply walk away from floods.

What an ingenious concept! A home that is mobile! How could this idea have eluded the great thinkers throughout history until now? Ain't progress grand?

The prototype cost £30,000 to build, including materials and time, but the designers believe it could be constructed for a lot less.