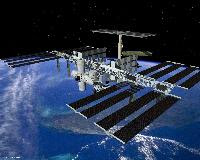 "NASA couldn't have staged it any better: 10 people in orbit for Thursday's 10th anniversary..."

Let me just pose this question to these 10 astronauts - Did any of you fly commercial to this birthday party today? (silence).

Let the record show there were no hands raised.

The economy back home on earth is in the tank (I personally am waiting for the DOW to fall below 5K before I turn my 401K leftovers into gold so that I can lock in my losses) and that Ahckmadeenadude in Iran is pushing the world to the nuclear brink. Yet, there you ten asronauts are, circling the globe in your extravagant 300+ Ton multi-billion dollar metal mansion on my dime!

The space station has taken longer for NASA and its international partners to build, cost more money and produced less science than originally envisioned. But that hasn't spoiled the celebrations going on all over the world — and off.

I believe they started their celebrations up there a little early, with the story the other day of the spacewalker that dropped her tool bag while caulking a joint (ryhmes with "smoking a joint, don'tit?). Allegedly, Astronauts Heidi and Stevo were "greasing a rotary joint on the station’s giant starboard solar array system" when a tether came loose.

I think Heidi and Steve were trying to become new members in the 220-mile-high club.

Think about that for a sec., somewhere hundreds of miles above your head, there is a hammer, a screwdriver, and caulk gun racing at 17,500 miles per hour in astronaut Heide's Gucci bag. It is estimated that it will cost NASA (taxpayers) $42 billion dollars to track this additional piece of space junk. (the previous sentence was a complete fabrication on my part, but watch it stick now. You know you'll quote it to somebody later).

But nevermind all that pessimism stuff. It's your birthday! God love ya, what am I talking about? Let's all stand up for the Space Station. Raise your glasses full of the crew's recycled purified urine (can you ferment that stuff?) and toast "the world's most elaborate and expensive housing project". Someone pass me the pouch of freeze-dried shrimp cocktail. They might as well party. There is nothing else to do until someone flies them another caulk gun.
Posted by DaBlade at 6:58 AM