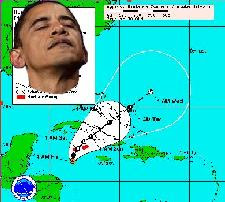 It has been just three days since Obama was elected president, and hurricane Paloma is turning north away from the U.S. Coincidence? Maybe the right-wing media would have you believe so! By pure force of will, President-Messiah-Elect Barack Obama is turning this hurricane away from our nation's shores.

If Obama had only been the Messiah-Elect when Katrina came barreling down on New Orleans! *sigh* But no, it was the evil President Bush, and we all know that Bush created and steered that storm, not just into the gulf and towards Louisianna, but directly into the Lower 9th Ward of New Orleans. Hmmm. Wonder why Mister Bush!

Here is the latest on Hurricane PALOMA from the National Hurricane Center:

PALOMA IS MOVING TOWARD THE NORTH NEAR 9 MPH...15 KM/HR...AND THIS MOTION IS EXPECTED TO CONTINUE TODAY. A GRADUAL TURN TOWARD THE
NORTHEAST IS EXPECTED TONIGHT AND SATURDAY. ON THE FORECAST TRACK...THE CENTER OF PALOMA WILL PASS NEAR THE CAYMAN ISLANDS LATE FRIDAY OR EARLY SATURDAY.

Uhhh, "Hello?" Absolutely no mention of Obama as The One behind our good fortune. Sure, Rush Limbaugh and his ilk were quick to point out Obama's connections to the Weather Underground when they thought it might hurt Obama during the campaign, but nowhere on Fox News or talk radio can I find Obama receiving credit for his underground weather connections that he must have used in turning this Bush/Cheney monster storm away.

I see the light now:
My blogging until now has been very critical of Mister President-Messiah-Elect Obama. I must have been confused, and I am very embarrassed that I ever doubted Obama's powers before. I used to believe in silly notions like "cause and effect". When the housing bubble popped and the subprime mortgage crisis led to the current meltdown, I looked for root causes. All I blindly saw was Barney Frank and his Democrat comrades running Fannie Mae and Freddie Mac, forcing the uncontrolled propagation of high-risk loans onto banks like a giant house of cards. Loans supposedly to "help the poor" by allowing them into homes they couldn't afford. What I conveniently ignored at the time was that PRESIDENT BUSH was in the White House.

My ignorant "cause and effect" beliefs seem so juvenile looking back now. Consider that I used to think a lunar eclipse had something to do with the Earth blocking the sun's rays on the moon. Now I understand that an eclipse is caused by a large dragon swallowing the moon. The next time I see this, I will join the believers in beating our drums and producing great noise to frighten the dragon away. Of course, we don't have to worry about any dragons now that we have Messiah-Elect Barack Obama!

JOIN THE MOVEMENT!
Watch this video if you still need inspiration.


And to think that I was almost at the point of joining that unfortunate non-believer on the video above (from 3:07 to 3:15).

"...It reminds us of how far we've come, and it's something everyone in our nation should celebrate in whatever little time we now have left."
Posted by DaBlade at 6:57 AM