Chattering Teeth Space Station Exclusive!: From sources close to this reporter (yes, I'm talking about the voices inside my head again).

Apparently, the feel-good "Thanksgiving in space" story yesterday that reported the ten astronauts enjoying a warm and friendly meal of freeze-dried turkey together was an exageration. While factually true, they were not happy with Heidi's latest exploits. You may recall that astronaut Heide Stefanyshyn-Piper made headline news in mid-November when she lost a tool bag on a spacewalk repair mission.
NOTE: She claims it was an accident, but is it a coincidence that the tool bag (purse) just happened to clash with the Neoprene-coated Nylon layer of her space suit?

Well she evidently has done it again! NASA had planned on surprising the crew with a real roasted turkey meal for the occasion, but these plans were scuttled when Heidi took it upon herself to pardon the Shuttle bird. She was found by the open bay door with a glazed look on her face and drool on her chin, mumbling over and over, "fly turkey, fly!" 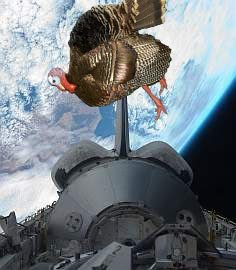 An astronaut wishing to remain anonymous stated, "Yep, we were really supposed to enjoy a meal of fresh roasted turkey with all the trimmings and washed down with a fine Chianti. Thanks to Heidi, all we got was a bag of dehydrated crap and a glass of our own piss."

The story has a happy ending though, as a needy family in Edmonton, Canada received this surprise fully cooked turkey dinner delivered right to their doorstep.
Posted by DaBlade at 8:04 AM