Willie the Parrot to the rescue! 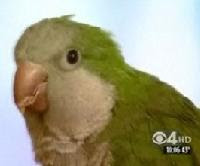 I love a good "animal saves the day" story. They are heartwarming and make you feel good, especially in these times of tumult, chaos, and confusion. So sit back and enjoy today's blog feature - "The Willie the Parrot story"
From CBS4 in Denver, Babysitter: Parrot Saved Girl's Life With Warning

DENVER (CBS4) ― A babysitter's parrot is being credited with helping save the life of a 2-year-old girl who was choking Friday at a Denver area home while the sitter was in the bathroom. "...Willie (the parrot) started screaming like I'd never heard him scream before and he started flapping his wings," said Meagan, the babysitter. "Then he started saying 'mama baby' over and over and over again until I came out and looked at Hannah and Hannah's face was turning blue because she was choking on her pop tart."

If this story is ever turned into a major motion picture, I see Christina Applegate in the starring role in this babysitter sequel: "Don't Tell Mom the Babysitter's Taking a Dump!"

According to the testimony from the babysitter so far, she is in the bathroom stinking up the joint, when in flies the parrot, violently flapping it's wings. Had the babysitter been a dude, he would have mistakenly thought Old Willie was just busting his chops over the smell and would not have been alerted to any problem. Thankfully, this was not the case.

BACK TO THE STORY:

"If (Willie) wouldn't have warned me, I probably wouldn't have come out of the bathroom in time because she was already turning blue, her lips were blue and everything," Meagan said.

DISCLAIMER:
This blog in no way intends to mislead the readers into thinking that this particular link leads to an actual photo of Hannah choking on a blueberry pop tart. Just move on. Nothing to see here.

BACK TO THE STORY:
Willie (the parrot) then astounded the babysitter even further by performing a flawless Heimlich maneuver on Hannah by wrapping his clipped wings around her and giving her a few abdominal thrusts until the pop tart was launched from her mouth. Willie performed three airborne somersaults and caught the pop tart in his beak in midair!

Sure I made that last part up, but if this is going to be a major motion picture blockbuster, I need to take some artistic license.

Willie didn't say much when CBS4 visited on Sunday. Meagan said he is usually pretty talkative.

I'm guessing that Willie the Parrot saw how Joe the Plumber was recently treated by the media and has wisely decided to keep his beak shut. Wise bird.
Posted by DaBlade at 7:18 AM