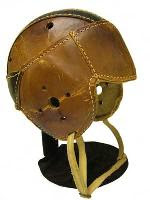 Coming to a theatre near you: Leatherheads 2, The Obama administration

I love the title to this article. Obama using bully pulpit to tackle economy. Tackle the economy indeed. I have the mental image of a 90-pound weakling Obama in an oversized football helmet, running as fast as his skinny legs will carry him. He hits the tackling dummy (methaphor for economy stupid) full steam and bounces straight back onto his seat, helmet twisted so that he is looking at an ear hole.

Obama of Oz is pulling all kinds of "economic stimulus" levers behind the curtain in an attempt to "soften the economy's fall" with another promised trillion here and there, but the best part is that he does this under cover of fault or blame during the transition period. Not that blame would ever come from his NY and Washington media partners, or that they would allow outside criticism to stick.

"Obama has said repeatedly there can be only one president at a time, and has kept a relatively low public profile... That changed at his news conference Monday, when the president-elect pressed for passage of a multibillion-dollar stimulus plan aimed at creating jobs, easing the home foreclosure crisis and rescuing the struggling auto industry.

The article quotes some insignificant "historian" who hinted that the recent stock market plunge made it necessary for The One to jump into the nearest phonebooth to don his cape, ala Superman, and come out to save the day. "Had he not gotten involved, the potential for really disastrous shifts in the economy were all there," (insignificant historian dude) said.


The Messiah-Elect makes us this promise: "It's going to be costly".

There. Don't you feel better now? Who cares what it costs, Obama is going to pay for my gas and mortgage. All he has to do is tax the rich to pay for all of these handouts.

WHAT!? Obamasan is talking renege on this?

HOW CAN THIS BE? All campaign season, he talked "hope and change" and sticking it to the rich. He hasn't even taken the oath on the (insert holy book of his choice here) yet, and he is backtracking on this promise?

With all the bad news we get every day, at least we could take comfort and solace in the fact the Obama would let the Bush tax cuts expire (read- TAX INCREASE) causing those above us on the economic ladder to slip and fall. Their misery would be our comfort. That's why 53% of us yahoos voted for this clown, am I right again?

He was winking when he said this, right? I mean, if he lied to us about punishing the rich, did he really mean it when he promised to retreat and surrender the war on terrorism immediately? What about closing Gitmo? We are banking on him following through on this pledge and allowing these misunderstood religious youths their freedom to take up arms against us again. What about his garauntee to immediately sign the FOC Act so that we could count on the continued and increased slaughter of our unborn?

His "jolts to the economy" will have the same effect as a crack ho's heroin injection (between the toes to hide the needle marks). God love ya, what am I talking about? Let's all stand up for Obama and his "economy tackling" (and crack hos).
Posted by DaBlade at 7:08 AM