Of Pirates and Holiday Natives 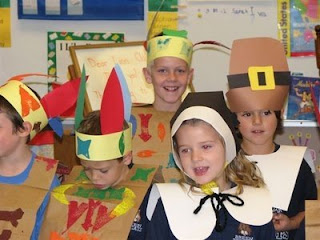 For decades, Claremont kindergartners have celebrated Thanksgiving by dressing up as pilgrims and Native Americans and sharing a feast. But on Tuesday, when the youngsters meet for their turkey and songs, they won't be wearing their hand-made bonnets, headdresses and fringed vests.

You have to laugh. Don't get me wrong, DaBlade is very much unhappy that the libs will be in control unchecked, and I readily admit that it is easier to laugh at these yahoos when they are in the minority. But I can't help it... *giggle* Liberals say the darndest things! Hilarious!

One lefty mom had this to say:
"Dress(ing) up as pilgrims and Native Americans is demeaning... I'm sure you can appreciate the inappropriateness of asking children to dress up like slaves (and kind slave masters), or Jews (and friendly Nazis), or members of any other racial minority group who has struggled in our nation's history."

Pasadena Closet Conservative postules that "Perhaps someday the Libs will stop insisting that Thanksgiving is a racist tradition that supports negative stereotypes".

I believe I may have a compromise and a way to bring us together. How about the crumb crunchers and their parents being allowed to dress up as Pilgrims Somali Pirates and Indians "Holiday Natives"?