If you're like David Pollard, you like to spend the weekends in your copper longjohns, in full Second Life goggle mode.

A WOMAN who met her husband on the internet has divorced him for "cheating" on her in virtual reality... The couple were both fans of Second Life - a game in which players create a new identity for themselves in a computer-generated world. Using 3D animated characters, known as avatars, users can move around and interact with others.

The couple were so devoted to the game that when they married at a registry office in July 2005, they marked the occasion by holding a virtual wedding in Second Life.

But, although the internet brought them together, it eventually tore them apart.

One day, Ms Taylor, 28, found Mr Pollard at the computer watching his avatar having sex with a prostitute in Second Life... The next day, Ms Taylor went straight to a solicitor to file for divorce from her 40-year-old husband of three years on the grounds of his "unreasonable behaviour". 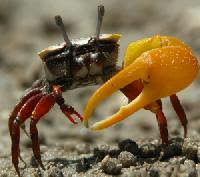 I guess they'll be sending back the virtual crock pot I bought them as a wedding gift. I guess Ms. Taylor doesn't like playing second fiddle to a cartoon. Speaking of "fiddle", the adjacent picture is NOT a picture of David Pollard (who is right handed), but that of a fiddler crab named "Bobbit". FUN FACT: Male fiddler crabs can regenerate this appendage, if they lose it, say, in a fight with their spouse.
Posted by DaBlade at 8:01 AM