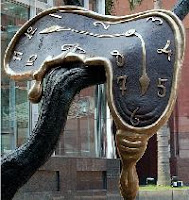 Did you know that we get an extra "leap second" today? Apparently this is due to "the minute slowing of the Earth's rotation." Yes, I know. I was confused at first to and wondered why we aren't being given the entire "leap minute." I mean, just who is getting the other "leap 59 seconds"? Is there some new Obama time tax involved?

But then I understood that the co-authors of the article meant that we get a "leap second" today because of the mynoooot slowing of the erf's rotary. "mynoooot" as in "really really tiny". Next time use a spel check guys!

So back to the "leap second" thingy. The clock custodians, in their infinite wisdom, have conspired to withhold the extra second from us until the moment before the stroke of midnight tonight. Right at the tail end of 2008 and just a moment before welcoming 2009. The clock custodians couldn't give us this extra "leap second" in, say August when it could be better enjoyed by us Snowtards who chose to live in Michigan. Noooooooooo!

By the way, how the heck do you get to be a "clock custodian" anywho? I don't remember this option as a career choice whilest I was engaging in higher edumacated fancy book learnin' at the UnaVersace of Michigan. Maybe it's some sort of monk order birth line thingy. They probably wear the hooded brown robes and have taken an oath of silence, as they traverse the halls of their secret lair (which, if I had to guess, is behind the giant gear wheel workings of Big Ben.)

In any case, good riddance to 2008! I would have bolded that last sentence for emphasis had I any confidence that 2009 won't suck even worse. Why tempt fate? Still, we should learn from our past and look forward with "hope". (yep, I did go there. I mean hope in the biblical sense, not the political sense.). So I say goodbye to 2008 and hello to 2009. Hello, buh-bye!

But I digress. What were we discussing? Oh yeah, "Time"! "Father Time"; "The Timester", "The Timeinator!"

I believe it was the Greek philosopher Deskcart who said... "Yesterday is history. Tomorrow is a mystery. Today is a gift. And if it doesn't fit, you better hope it didn't come from Wal Mart. Have you ever been through their returns line? Not the best dental plan I'll tell ya".

Bottom line, we get more time today to do with whatever we choose! I hope you enjoy yours. Everyone, synchronize our atomic watches.

I leave you with my time line of rock. (yes, there are plently more time-themed songs than my list. Feel free to add to it)

The Zombies-Time of the Season

Styx - Too Much Time On My Hands

Bryan Adams - This Time
Posted by DaBlade at 7:22 AM