"That shoe throw was a little too pitchy for me dog”

"This is a gift from the Iraqis; this is the farewell kiss, you dog!," yells an Iraqi reporter, as he throws his dress shoes at our president.

Just a few more random thoughts on this topic...
Arabs consider calling someone a "dog" as harsh. American Idol judge, Randy Jackson, is quoted as stating, “I’m sorry dog, it just didn’t work for me. That throw was a little too pitchy for me dog”.

Hitting someone with a shoe is a deep insult in the Arab world, signifying that the person being struck is as low as the dirt underneath the sole of a shoe. MISSING YOUR TARGET BY TWO FEET FROM SIX FEET AWAY IS CAUSE FOR DEEP INSULTS ON THE AMERICAN PLAYGROUND TO THE THROWER!

Hey Al-Zeidi. That was really a lame-@$$ throw dog. Is THAT all ya got? Does your husband throw shoes too? C'mon dog! Get the shoe out from under the burka a little cleaner next time!

O.J. Simpson heard about this incident from his jail cell, where he is serving a 16 year sentence for kidnapping and robbery. He stated, "Were those ugly ass Bruno Magli shoes? How much does he want for them? I really miss mine."

Prime Minister al-Maliki called the shoe throwing a "a shameful savage act" and demanded a public apology from Al Baghdadia, the independent satellite channel that employs Zaidi. I could have sworn he was from CNN. Then again, I'd be surprised if there are any CNN "journalists" wearing dress shoes instead of their hippy sandals. 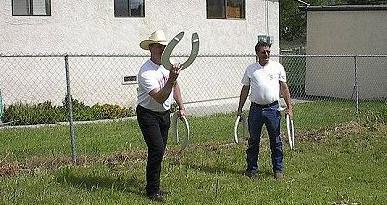 CHATTERINGTEETH EXCLUSIVE!:
The shoe thrower is now under arrest with the Iraqi military command in Baghdad. A top secret American interrogator has been called in to do the questioning. He is an American golfer by the name of John Daly. He was slow to arrive at the military compound, as his carry-on full of golf shoes with metal spikes and Budweisers kept setting off the airport metal detectors. "Tools of the trade," Daly said. "Now that we know what really sets these clowns off, I was asked to bring my work shoes over and give this dirtbag a taste".

In Conclusion:
So I have had a little fun regarding this "Shoegate" thang for the past two days. You may think I take this event lightly, or that it's a big joke. That I somehow have joined ranks with the likes of the wingnuts over at Daily "Wac"kos and the Huffing"glue" Post. Au contraire, mon amie. I think the shoe thrower should rightly be interrogated, tried and imprisoned. 16 years in the spiderhole that was his hero Saddam's hideout may give him a little gratitude for the sacrifices made by our brave troops and this great country.

I'm sure everyone remembers that Cosmo Kramer looking dude with the shoe bomb. President Bush is a man's man, standing in the pocket and looking potential danger in the eye without blinking. I have no doubt that, if push came to shove, he would kick Putin's @$$ in a bare-knuckled brawl. I'm going to miss this great man occupying the Oval Office. We have all been the safer for it.

Let these weenies throw their shoes. We'll keep raining American Grade-A ordnance on the terrorist's heads.
Posted by DaBlade at 6:48 AM