The big news of the day *yawn*: 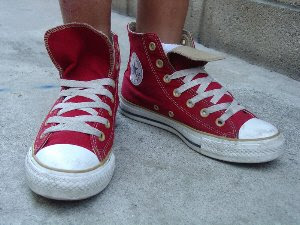 An Iraqi journalist throws his shoes at President Bush and yells, "It is the farewell kiss, you dog"! I would have loved to see W respond by nailing this guy on the chin with one of his Texas cowboy boots.

"Soles of shoes are considered the ultimate insult in Arab culture. After Saddam Hussein's statue was toppled in Baghdad in April 2003, many onlookers beat the statue's face with their soles."

I find it odd that Arabs consider "all things shoe" as the ultimate insult. In fact, "shoe insults" rank higher than "decapitation". Then again, nothing could start an American playground brouhaha faster than your opponent stating, "your momma wears army boots." Now THEMS fighting words.

I seem to recall Bush 41 mispronouncing "Saddam" as "Saa-Dumb" in the leadup to the first Gulf War. It was considered the ultimate insult because the translation meant "boot licker". It is less widely known that Bush's annunciation of "Hussein" was interpretted to mean "Uday and Qusay wear red stiletto high heels under their traditional Iraqi garb". Kuwait was invaded a short time later.

But I digress. As for the Iraqi shoe throwing journalist, Bush was said to have stated, "If you want the facts, it was a size 10 shoe that he threw, and thankfully made of camel toe hide. I'm just glad his wife wasn't here or I would have been dodging horse shoes."

Debbie Schlussel grades the players in "Shoegate" this way:
Bush Gets "A+" for Shoe-Dodging; Secret Service Gets "F"; Thrower Tries Out for New NFL "Dearborn Jihadists"

Whoever headed this shift needs to be reassigned to checking fake currency in South Dakota. Not only did the guy succeed in throwing one shoe at the Prez, but had time to "reload" and throw the second one, too. And his aim was perfect and unfettered each time (great passer--get him a tryout with the new NFL Franchise that will replace the Lions, the Dearborn Jihadists).

That is an excellent point. Certainly, we need our presidential body guards to be gunslingers, but when lesser force is required, they ought to be adept as "shoeslingers". Had these agents been trained at this skill, at the first sign of trouble from this Iraqi journalist, he would have had 10 pairs of keds winding around his head like a tetherball wrapping it's post.

Is there an American female youth in training somewhere in farm flyover for this eventuality, or is she part of a shoe throwing domestic terrorist group?
Posted by DaBlade at 7:25 AM