As of Wednesday night, Norm Coleman led Al Franken by 316 votes in this Minnesota Senate race with 98 percent of the ballots counted.

That's all I got from this article before my eyes started to glaze over. I mean, there was talk of 133 disenfranchised mystery voters and ballot challenges. But with the dems supermajority no longer at stake (and this being about Al Franken), who outside of Minnesota would care? Maybe the three or four libs that actually listened to his boring a(blog edit) radio show - but I'm betting they're ice fishing this week.

Then I see this: Al Franken's campaign is calling for the "systematic forensic search" of a Lutheran Church used as a polling station on Election Day in hopes of finding 133 missing ballots. 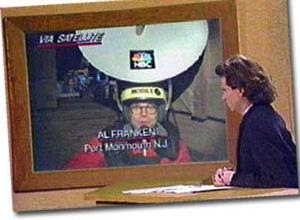 Whenever Franken is in the news, I always think of him from the old SNL "Weekend Update" skit where he plays a field reporter live-feeding his signal via satellite dish strapped to his noggin. I always visualize the stupid dish floating above Stuart Smalley's vacuous skull, sorta like the big cartoon cowboy hat floating above the characters in the Arbys commercials. Not because he has ever made me laugh, But because I believe him to be dangerously deranged. Assaulting and desecrating this church for votes should remove all doubts on that.

Certainly, Obama should be able to find a suitable post for this nutjob in his administration. Permanently affix the dish thingy to his head with some bolts, put him in a dingy off the shores of Somalia and have him search for the pirates. Or Franken could be plugged into the grid as a mobile hostile missile launch detector for the defense department. Nah, that would assume both the administration and Franken himself give a high priority to national defense.

I got it! Franken could be Obama's first supreme court appointment. I don't think he would be any crazier than Ruth "Buzzi" Ginsburg.
Posted by DaBlade at 7:32 AM