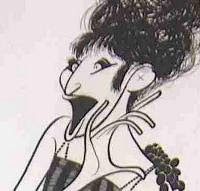 B.S. joins Morgan Freeman, country singer George Jones, dancer and choreographer Twyla Tharp and musicians Pete Townshend and Roger Daltrey of The Who as this year's recipients of the Kennedy Center Honors.

"The honors recognize individuals who have had an impact on American culture through the performing arts, part of the living memorial to President John F. Kennedy."

"Impact on American culture"? You mean like a planet-killing comet? (hat tip to Freeman's work in the movie Deep Impact). And as much as I like The Who, does "Momma's Got A Squeezebox" really justify a White House culture awards ceremony?

The White House is still home for President Bush and family (at least for a few more weeks), and I have to wonder why he didn't put his foot down and state unequivocally that there would be no B.S. allowed.

My blog staff tells me not to say this, but I’m going to say it anyway. you could literally smell B.S. coming into the White House. It may be descriptive but it’s true. (hat tip to Harry Reid, for his "smelly tourists" inspiration)

Don't misunderstand, I'm not suggesting that B.S. should be waterboarded for her ignorance (although this thought HAS to have crossed the president's mind). I'm simply stating that she should have been left off the A-list. I will say that I do enjoy visiting B.S.'s website on occasion for her "thought of the day". How's that for an oxymoron?

I send my CSI BS squad to her posts and they have yet to uncover any clues that she has ever enjoyed a worthy and intelligent thought. She is a far leftwing nutjob partisan hack. Here is a jewel from her latest post (11/5):

After 2 stolen elections, this time, in this election over 57 million Americans made their voices heard. I am so proud of our country today… miraculously overnight we have regained the respect of the world. From England to Africa, people are celebrating Barack Obama’s victory…

Yikes! I'm so happy that, just like First Lady messiah-elect Michelle, she is finally "proud of her country." And the respect thingy from the rest of the world. Very important. Maybe the islamo-terrorists that recently targeted Americans, British, and yes, "Jews" in Mumbai haven't gotten this great news.

B.S. is quoted as saying that, "Art transcends politics this weekend". I think she is overestimating her talents in both arenas. I hear that B.S. is also a singer and an actress. Yeah sure, just like Michael Moore is a "documentary film maker".
Posted by DaBlade at 6:56 AM