I keep having this recurring dream. It's a variation of the television series The Waltons and I don't know what it means. 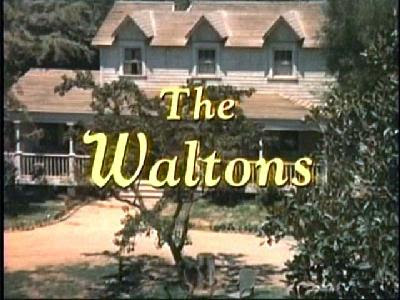 The Waltons aired my entire teen years (1972 to 1981) and I did love that show. Back in those days, we didn't have any "internets", so it was either watch The Waltons or play Monopoly again. What's that youngin'? What's Monopoly? It's a board game. Huh? What do you mean, "what's a board game"?

So the basic weekly plot lines as I recall, centered around a really large family that lived in abject poverty and squalor during the Great Depression, and all the entertaining hijinx that ensues from that condition. There was "Ma" and Pa" and a set of grandparents, plus about 42 children (I really can't remember how many children lived in that house, nor am I certain that Ma or Pa knew either). The only kid I remember was the eldest of the Walton tribe named John Boy. John Boy liked to write in his journal, and it was these journal entries that made up the telling of each episode. What's that youngin'? What's a "journal"? Just think of John Boy as a blogger without the computer.

So anyways, back to the dreams. There really isn't much more to tell. I dream I'm on Chattering Teeth Mountain, chopping wood or driving a Model T car around a two-track country road leading nowhere. There are chickens strutting along the roadside, and there is a lot of corn. The Mountain folk are dressed like Amish, except for me. I am wearing Lederhosen. Did I mention that I'm mayor of Chattering Teeth Mountain?

Don't ask me what it all means. All of the residents of CT Mountain are poor, but they are all happy. They don't have the possessions that we take for granted - or that we feel are required. No iPods, no cable TV, no Nintendo wii. But they do have their Bibles and their faith, and everyone worships God and is thankful to Him for all of their blessings.

I know... it's crazy. Dreams are crazy that way sometimes. Let me know if you make any sense out of it. In the meantime...