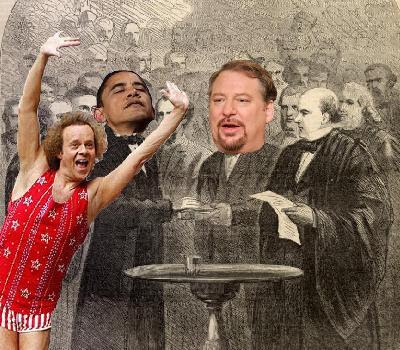 Simmons was a last-minute invite, as Obama finally caved to gay pressure groups upset with his Warren selection.

Evangelical pastor Rick Warren has accepted The One's invitation to do the convocation at his inauguration, and radical Gays are having a hissy fit. Warren is pro-life, but is mainly under fire for agreeing with Obama on opposing gay marriage. That's right! Obama and Warren are like "peas and carrots" on that issue.

WARREN: Three years ago I took enormous heat for inviting Barack Obama to my church because some of his views don't agree with mine. Now he's invited me.

OBAMA: I remember thaaaaat day. Uhhh... It was a strange church service. (pause) Like nothing I haaaad ever experienced. Aaaaand Not once did Pastor Rick blame our country for terrorism. There was nothing about chickens coming home to roost, aaaand there was not one "G-- D--- America!" Uhhhh... Thaaaat just didn't feel like worship to me.

WARREN: "You don't have to see eye to eye to walk hand in hand."

Obama defended his choice on Thursday, saying that he has also invited Joseph Lowery, a Methodist minister and civil rights leader who supports same-sex marriage and gay rights, to deliver the benediction.

LOWERY: "You don't have to see eye to eye to consumate a prison relationship. In fact, it works better that way."
Posted by DaBlade at 4:22 PM