PICTURED: This is NOT Illinois Gov. Rod Blagoje-biotch, but just some other scalper trying to sell a seat to a Red Sox game. As far as we here at Chatteringteeth are concerned, the accusations that Illinois Gov. Rod Blagoje-biotch stood outside the capital with a sign reading: "need a senate seat" are unfounded, unconfirmed, hearsay, gossip, rumor, inuendo, and possibly not even true. 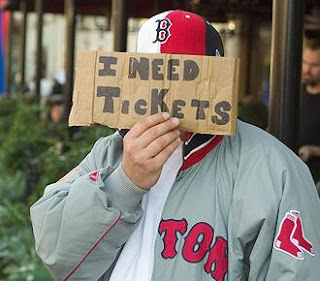 [THIS] Obama pledges not to smoke in White House. So he's going to go out on the patio? What's 20 secret service agents huddled around him on the White House veranda going to cost us taxpayers? Will the agents sue our already bankrupt government for second hand smoke damage? After the news regarding Illinois governor Rod Blagoje-biotch, Obama must be chain smoking today. (Who knew there was fu**ing corruption in Chicago politics?)

[THIS] I read that Oprah is back to 200 pounds. I haven't seen her in a while, but I think that's terrific that she lost some weight again. I believe it was Oprah who first called Obama "The One". Does this now make her "The One and a Half"?

[THIS] Man arrested after cops find crack in his vomit. I guess it could have been worse. Better for the police to find "crack in your vomit" than the other way around. *sigh* No sense sitting around waxing nostalgic for them college days...

[THIS] Bandits in Drag Make Massive Jewelry Heist at Harry Winston in Paris. Brings to mind a different visual than say Clint Eastwood or John Wayne (or even Al Pacino in Dog Day Afternoon...) Have criminals lost all self-respect? Can we get a little dignity back when committing felonies please? We're not juveniles here, so how about a little more maturity! As an aside, "Harry Winston" is the legal name of my special purpose.

[THIS] When I first read the headline: Bank to give credit to Chicago plant, I thought to myself, "No wonder we are in such a financial mess!. Unless, of course, the plant in question is a Rhododendron. As everyone knows, Rhododendron's are a much better credit risks than Azaleas. (or actual sub-prime borrowers for that matter)"

[THIS] Dems, White House agree to $15B auto bailout. There will be an overseer of the money, or "car czar". Rep. Barney Frank, D-Mass., chairman of the House Financial Services Committee, said that Obama would be able to replace any car czar when he takes office Jan. 20. I'm thinking senior advisor David Axelrod for the post. I just think it would be cool to say, "there goes the car czar Axelrod". Obama, Frank, and company holding the purse strings and running GM. Talk about the fox in the henhouse.
Posted by DaBlade at 7:11 AM