Now that NORAD doesn't have to track Santa for another year, all eyes, satellites, and microphones can once again be dedicated to The One.

The economy is still stupid; Israel is closer to moving on Gaza; Iran's Ackmadeenadude is still crazy; and Pakistan (or "Pock-ee-ston", as The Barry likes to pronounce it) is moving it's troops to the Indian border. Saber rattling and chest bumping take on a whole new meaning when both sides are nuclear powers.

So where is The One? 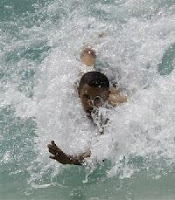 Eating shave ice and swimming with the dolphins on Waikiki.

SIDE NOTE: You know how some people get that brain freeze, or Ice-cream headache, from scarfing down that bowl of chocolate chip cookie dough surreptitiously freed from the freezer when their woman was in the other room? Well, I get the EXACT same headache whenever I think of Obama as POTUS.

Yes, I know he hasn't been sworn in yet and is entitled to a vacation at some point. It's just nauseating watching this charlatan Chicago thug getting the King Kamehameha II treatment in Hawaii when he could at least act like he cared that he is taking over in just a few weeks.

Then again, I remember when Obama slammed McCain for suggesting they cancel a debate and fly back to Washington to deal with the financial crisis. Obama: “I think it is going to be part of the president’s job to be able to deal with more than one thing at once."

...Aaaaand I have this Blackberry (pause) thaaat gives me updates (pause) on the Bulls.

Looking back, It was a masterful campaign move on Obama's part and made it look like McCain was trying to duck him. I think it was more about Obama belligerently stating that he cared more about his own presidential ambitions than fulfilling his job responsibilities as Senator. I also think he understands he is clueless as a problem solver and the lower the profile he keeps, the better.

Things are so gloomy now that it has libs rubbing their hands together with glee. As Rahm Emanuel puts it, "You never want a serious crisis to go to waste," presumably so you can use it to leverage people's fears against them (while they cement their power and turn this country into a socialist nanny state). When the "unedumacated" Obama voter finally wakes up, it may well be too late.

WASHINGTON – Barack Obama will inherit two wars and the worst economic conditions in three generations when he takes the oath of office on Jan. 20. Ironically, that challenge might be a blessing for the president-elect — unemployment is so high and consumer confidence so low that even modest improvements will let him claim progress.

Yeah right. Even modest improvements would be despite his best efforts.
Posted by DaBlade at 8:06 AM