I heard someone scream, "INCOMING!," and we dropped to the ground and curled up into the fetal position. One second, my friends and I are talking and smiling and enjoying the day. The next second all hell was breaking loose, as the incoming projectiles were crashing all around us. I peeked up to see my friend Mary sobbing, "Why waa waa waa why?," as she rocked back and forth, seemingly to the rhythm of the reports all around her.

The above is a Chattering Teeth dramatization of...
A) A first hand account of Hamas terrorists perpetrating rocket attacks on innocent Israeli citizens.
B) The messiah-elect warms up on the driving range before a round with a mix of Hawaiian high school pals and Chicago confidantes, scattering the pool of reporters with his miss hits.

If you answered "B", you are correct. Obama has been keeping the golf courses in Hawaii free for democracy.

From The Page:
"Obama, wearing sunglasses, a white shirt, khaki shorts, white and brown golf shoes, and a red baseball cap emblazoned with the City and County of Honolulu's Ocean Safety logo, drove down to the driving range."

...Obama, with a white glove on his right hand, spread the range balls out on the grass before putting an iron behind his back and stretching. Obama took three practice swings. His first shot was a ground ball straight ahead. His next shot went airborne but created a divet that Obama walked out to pick up and replace. After several more shots and one more replaced divet, Obama looked up to the pool and pointed at the photographers and reporters with his iron. The pool was then moved into the course's clubhouse.

So here is Obama, weed-whacking away with the club and sending sod (and an occasional golf ball) in all possible trajectories. He looks up and sees the press pool watching. He raises the iron (picture Moses raising the staff to part the Red Sea) and points at them, as if to say "Begone you unworthy scribes, for you are unfit to lay your pitiful eyes upon my chiseled pectorals and awesometudeness."

Sounds like The White Gloved One's golf swing more closely resembled a gyrating Michael Jackson trying to put out another hair fire than it did a Tiger Woods swing. I just hope the secret service agents were equipped with hard hats.

This episode may make it easier for the secret service to assign The One with an official codename for his term. Everyone knows that any self-respecting secret service agent wears a trenchcoat and dark sunglasses, and uses codenames when talking into his lapel. Ronald Reagan was referred to as "Rawhide", George H.W. Bush was "Timberwolf", and Clinton was known as "Eagle". Well apparently the eagle has landed. I suggest that Obama be assigned the codename "The First Divet". It sounds like a natural fit, as he was reportedly sending out "Blagojevich bangs sized" divets with each swing of the club.

Of course, The WaPo would still report it something like this...
"The sun glinted off chiseled pectorals sculpted during four weightlifting sessions each week, as Obama sent the golfball sailing into the sunset."

Somewhere, Chris Matthews is getting that shiver up his leg again.

Think you have a better codename for Obama than "The First Divet"? Well then, bring it! 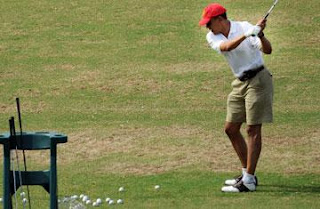