Lest I forget... Happy New Year.

I don't know about everybody else, but as we exit 2009 and the aught decade, I say, "good riddance. Don't let the googly eyed new years glasses kick you in the barack."

Speaking of those glasses

, Jeff over at The Bright Blue Cow realized that the 2010 new years eve glasses would no longer allow the two center zeros to be fashioned into the glasses rims. He made this observation almost a full year ago!!

And yet, Obama was awarded the Nobel Peace Prize.

After further painstaking research by the Chattering Teeth internet microbots, they've discovered that the Blue Cow's work in this field was not pioneering, which in no way disqualifies him for the Peace Prize. However, the Althouse posted a sketch on January 2nd, 2009, as a sort of prophesy of this year's version of the glasses. At first blush, putting the "1" on the nose is a great solution. After further review... I don't mean to alarm anyone, but I've juxtaposed this sketch with Navin R.Johnson wearing his invention of the Opti-Grab. If these glasses catch on, there will be a pandemic of crossed eyes in 2010. 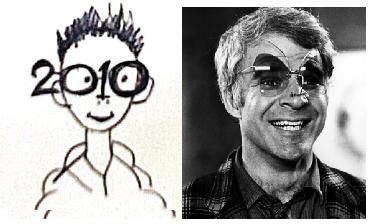 Body scanners at airports, eh? I wipe my hands of responsibility if the next time I fly, my security body scan of my chiseled and bountiful masculinity falls into female security hands, thereby wreaking the perceptions of their husbands by comparison and ending marriages. I'm like the sun, ladies. Don't stare directly at me or my body xray for more than is necessary.

Drudge has been screaming this headline for the last 24 hours:
Russia may send spacecraft to asteroid
BACKGROUND INFO: The asteroid is Apophis, and in 2029 it will come within 18,300 miles of Earth. The closeness of it's return trip in 2036 will depend upon exactly how it's orbit is changed from the 2029 encounter, but experts currently put the impact probability for 2036 at 1-in-250,000.

Apparently, Russia's space chief doesn't like them odds. He remembers some scientist somewhere (algore?) telling him that this space rock is heading for Russia.

His exact quote: "I don't remember exactly, but it seems to me it could hit the Earth by 2032."

Obviously spoken between sips of vodka, because in 2032 it is on the opposite side of the solar system. I don't know about you all, but I question Russia's motives for wanting to send a rocket to the asteroid to "give it a nudge". Oops! Wrong way! Leave it the alone. Besides, what does Russia have to fear. You could just have Putin stiff-arm this girlie rock and fling it away like so much baby poop. 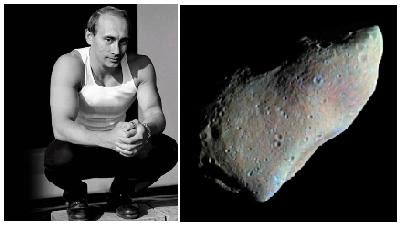 In conclusion, I wish you all a very Happy New Year. May 2010 be full of joy, health (get well soon Rush!), and a conservative tsunami that swamps the democrats to retake the House. Let's make a resolution to fling Harry Reid, Nancy Pelosi and the rest of the libs out of office like baby poop.
Posted by DaBlade at 7:30 AM