Earlier this week the story broke regarding a beluga whale stunning researchers with it's imitation of the human voice. Since then, Noc has been speaking to reporters in unbroken and flawless English.

"I was just messing with those San Diego dope-smoking marine biologists by throwing them the irritating Flipper squeaks," said a clean and articulate Noc.
Noc told reporters he decided to drop his ruse because of the importance of this upcoming election.

"I might be just a talking cetacean in a big fish bowl, but even I know we can't afford another term from Obama. Consider this my official endorsement of Mitt Romney." 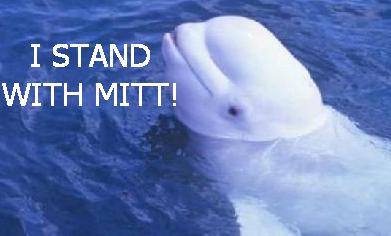 Joe Biden made a detour to the aquarium after hearing about Noc, and subsequently suffered a horrible impromptu debate loss at the fins of the bulbous headed mammal. "Seriously, I thought he was Bob Beckel," explained Biden.

Noc told reporters his sparring partner in preparation for his debate with Biden was a Sea anemone.

"It's the best stand-in for Joe I could find down there. They both have a column shaped body ending in an oral disc, and a brainless and primitive central nervous system. Honestly, the sea anemone gave me a tougher time than Joe," stated Noc, several octaves lower than typical whale calls and with a slight Wales accent.
Posted by DaBlade at 7:47 AM