Great news. Springsteen to Campaign For Obama in Ohio. Think what you will of Springsteen, but certainly he is entitled to his opinion - especially when he sings them. What better musical match for the nonsensical democrat platform than the gravelly-voiced Boss of unintelligible and mumbled lyrics. I used to listen to his music 30 years ago in my youth when I never gave politics more than a passing glance. I liked his music then, even though I had no idea what he was singing about. That pretty much sums up Obama's supporters.

SPRINGSTEEN STUMP SPEECH: It's all cold down along the beach, the wind's whipping down the boardwalk... Hey band! (Yeah? Hey, babe!) You guys know what time of year it is? (Yeah!) What time, huh? What? (Election time!) What? (Election time!) Oh, Election time! You guys all, you guys all been good and practicing real hard? Yeah? Clarence, you been, you been rehearsing real hard now, so Obama'll bring you a new Obamaphone, right? Everybody out there been good, or what? Oh, that's not many, not many, you guys are in trouble out here! 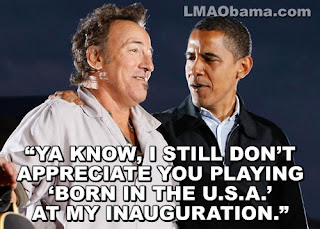 Fast forward. If Obama is re-elected, and a few years later when I'm warming my hands at a campfire with Ted Nugent while the venison cooks on the skewers - our survival clan might look down from our temporary hilltop campsite upon the burned out shell of a once-great American city as it smolders in ruin. Uncle Teddly pulls out  his acoustic guitar, electricity a distant memory, and begins to play Free For All.

Here we go, look out below I'm on the prowl tonight - When it's said and done I have my fun I can chew anything I bite - Come one, come all to a midnight ball The invitation's there - I come alone and I'm drivin' home I'm healthy, I do declare It's a free-for-all.

I hope those Obama voter zombies stumbling around with their useless dried up obamaphones on the dark streets below get enough to eat tonight.