Mother of Slain State Dept. Official Tired of Being Lied To and Stonewalled by Obama Administration

SMITH: Obama told me. Hillary promised me... They promised me. I told them, "Please, tell me what happened, just tell me what happened... I told them, "Please, don't give me any baloney that comes through with this political stuff." And I still don't know. In fact, today I just heard something more that he died of smoke inhalation... I look at TV and I see bloody handprints on walls thinking, my God, is that my son's? They haven't told me anything. They're still studying it, and the things that they are telling me are just outright lies. That Susan Rice, she talked to me personally, and she said, "This is the way it was, it was because of this film that came out... Leon Panetta actually took my face in his hands like this and he said, trust me. I will tell you what happened. And so far, he's told me nothing. Nothing at all. And I want to know... I cried on Obama's shoulder, and then he kind of looked off into the distance, so that was worthless to me. I want to know, for God's sakes, or for Allah's sake or whoever's sake is there."

OBAMA: Uhhhh... Hey Leon! Do we still have any more of those identical condolence form letters
I personally had handlers send to those bereaved family members of the 30 US service members killed in that helicopter crash in Pockystan... errr.. Afghanistam... or whateverstan that showed the depths of my sorrow and compassion? Break out the robo signing electric pen and let me give this lady some comfort, Obama style!... Uhhhh... You did get someone from I.T. to fix thaaat robo signer after it jammed last week while signing my heart-felt 20th Anniversary card for Michelle, didn't ya? Fantastic! 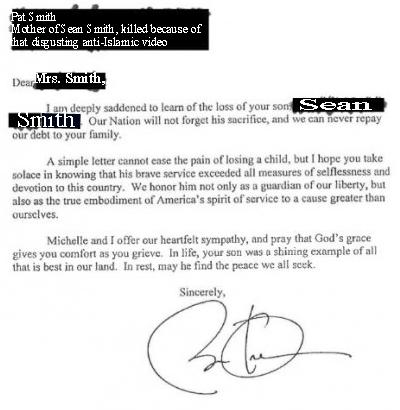