Fellow mainstream media comrades, don't go into an interview with a Republican opponent again (or a presidential debate) without being armed with this bad boy. The Liberal Spin Doctor (LSD) is a cardboard wheel chart that fits in the palm of your hands and goes where your teleprompter can not! LSD is an interview aid for the intellectually challenged leftwing reporter. 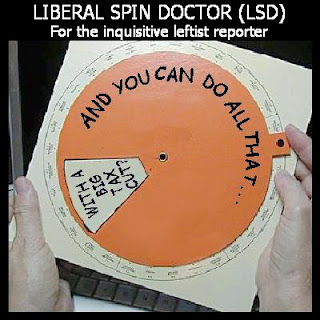 No little occupy Johnny, not an iPhone thingy. The Liberal Spin Doctor consists of two layers of round cardboard "wheels" mounted together with a grommet through their centers, allowing them to spin independently. The front wheel has a window cut out to expose random snappy comebacks!

"Hey announcer guy, what the !%$# is a grommet? Some kinda gremlin you see when on LSD?"

No silly! Try to focus. Is the interview not going the way you want it to, with no "Gotchas"? Is the Republican interviewee giving you an impassioned and reasoned answer using those pesky fact thingys? Not getting a chance to get your talking points in?

"Well mister announcer guy, If I want to end my interview by trying to embarrass the Republican, how can I do that?"

Just give the wheel a spin! Let's watch it in action. It's obvious this reporter is using LSD!

If the Republican talks about energy independance, move the selector wheel to "GREEN"!

It's all becoming clear to you now, ain't'it? Remember during a Republican candidate debate when moderator George Stephanopoulos bizarrely accused Romney of wanting to ban contraception?

Now you know. George was on LSD.


Don't be the only leftwing state-owned media "reporter" not using LSD! Get yours today!
Posted by DaBlade at 8:10 AM