Much has been reported on how the "inexperienced" 42-year-old Paul Ryan has been preparing to take on the skilled and battle-hardened debater, Joe Biden, in tonight's one and only 2012 Vice Presidential debate.

Ryan has spent time working on trying to keep Biden from cutting him off. Former Solicitor General Ted Olson has played the part of Joe Biden in the early mock practice debates, "cutting him off, talking over him or throwing a wrench into his rehearsed answers".

SPOKESMAN: While Ted did a great job, we decided we needed a better representation of Joe Biden, and what better facsimile of the flesh and boneheaded version than Disney's Pixar Toy Story 3 Playtime Sheriff Talking Woody! 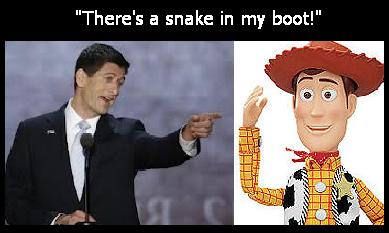 We surprised Ryan one day by swapping out Ted with Woody and started Paul going on his talking points and then we would just randomly pull Woody's string to disorient and interrupt Paul. The resemblance to Joe was uncanny!


There were the standard Woody favorites...
"Howdy Partner","Yeehaa! Cowboy", "There's a snake in my boot!", "Reach for the sky!"

and some new curve cannon balls...
"Stand up Chuck!", "They gonna put y'all back in chains!", "The middle class has been crushed these last four years!"