The PGA reported a sudden drop in the average U.S. golf handicap rate from 8.1 strokes to 7.8 strokes per round, one month before Election Day.

Obama is single handedly taking credit for this drastic golf improvement, as he has personally accounted for well over 5 trillion rounds of golf since taking office. With that much golf you're bound to see some improvement. 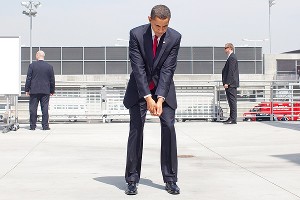 OBAMA: Hold hold, hold on, hold on now! Everybody knows that you never state handicaps with the distracting decimal and numbers after the decimal, and that you always round down. Let's just call the national golf average an even "7", whaddya say? So in conclusion, let me just state thaaaat I am happy for my part in getting Americans golfing again.


General Electric CEO Jack Welch, a Republican, tweeted his skepticism: The Obama administration would do anything to ensure a November victory, including manipulating golf data.


Critics point out that if you count all of the unemployed and under employed Amrericans who no longer can afford to golf because of Obama's policies, the national golf handicap rate would be well over 16.