Was "High Altitude" or "Low Attitude" to blame for Obama's suffocating debate performance?

"Obama arrived in Denver at 2 p.m. today - just a few hours before the debate started. Romney did his debate prep in Denver. When you go to 5,000 feet and you only have a few hours to adjust -- I don't know." Algore 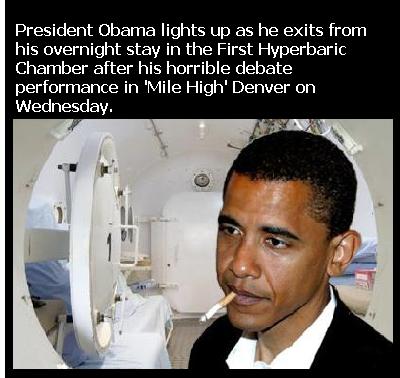 According to the chief HBOT technician, Obama was delirious. "He wasn't making any sense! He was saying things like, 'Where's yo dollah!?', and something about 'the bullet not being taken out'. When he started to give special shouts out to reverend Wright, we knew we didn't have much time, and we just barely got him into the First Hyperbaric Chamber.  He was still talking gibberish, saying something about 'obamaphones' and talking about himself in the third person. The last thing I heard him say as I closed the chamber door was, 'Keep Obama in president, you know?'"


HBOT treatment involves the breathing of pure oxygen while in a sealed chamber that has been pressurized at up to 3 times normal atmospheric pressure, speeding up the healing process by delivering oxygen to injured areas.

President Obama was visibly feeling better Thursday morning after having spent the night of his 20th anniversary  in the chamber by himself.

"Some of you may have noticed thaaaat I was a bit distracted during the debate. I was, but it didn't have anything to do with some 'super top secret security threat' or something. I always ignore those warnings as just noise. No, I was worried because I knew Michelle was feeling amorous - like she does every year on our anniversary. I kept thinking about this cartoon for some reason. " 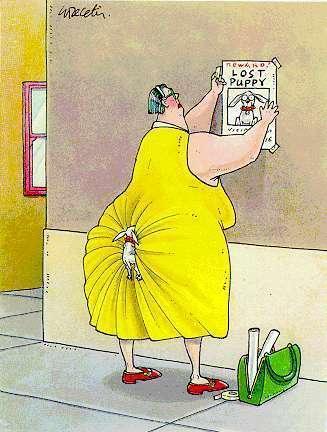 Meanwhile, the Obama campaign is scrambling to prepare for next week's Vice Presidential debate scheduled for Thursday, October 11, at Centre College in Danville, Kentucky.

JAY CARNEY: "We're worried the Romney campaign will be up to the same dirty tricks with Ryan using those "fact thingys" against Joe. President Obama had to perform in the thin Denver air at 5,183 ft above sea level. Joe will be in Danville, Kentucky, with an elevation of 920 feet. You would think that elevation would therefore be less of a concern, but this is Joe Biden we are talking about. Just being in the same state as the western edge of the Appalachians Mountains concerns us."

White House engineers have begun construction of a portable Hyperbaric Chamber they plan to use in next week's debate. Joe Biden will actually do the debate from this chamber. Not only will this keep Joe's blood oxygen rich, but it gives the campaign the extra benefit of having the ability to shut down the internal microphone at each gaffe. 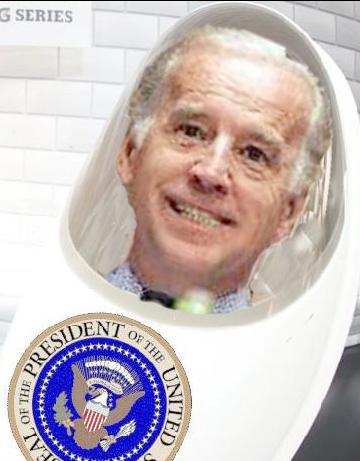