I never bought into the whole birth certificate conspiracy, but like the late great Socrates once stated, "I don't know nuthin' 'bout 'nuthin". So, who knows? I certainly am not opposed to folks getting fired up and speaking out against the unwanted tissue mass currently occupying the Oval Office.


KEYES: "...This is insanity. It's as if we have put insane children and adolescents in charge of our government. .. A couple of years ago we were arguing over every penny in the United States budget and it was quite clear we did not have enough money to go around. Will somebody (tell) me where we came up with $2 Trillion dollars in the course of the last six months? Did we wish for it out of the air? Have people gone mad in this country? You don't have that money. We are claiming that a bankrupt government can save a bankrupt banking system..."

Can't argue with any of that. Then again, I guess you could, but you'd be wrong and just look silly.

Remember, FULL DISCLOSURE when trying to sell your house! 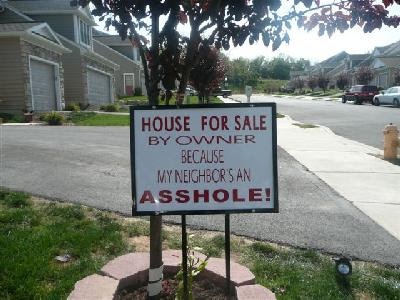 Personally, I like my neighbors just fine. I've even met a few of them. However, I'd need to change "neighbor" to "President".

This blog would like to thank (blame) "the shang" for contributing the Keyes link, "The Dedicated Spartan" for the neighbor pick, and "MSgtEd" for the chimp joke.
Posted by DaBlade at 6:52 AM