TelePrompters for the Homeless (and other eloquent words)

My dear blogsters,
Posts have been, and may continue to be a little thin this week due to my volunteer work down at the shelter passing out homemade mobile teleprompters. Yes, I know that I possess a herculian-sized heart of humanitarianism. You don't need to tell me. 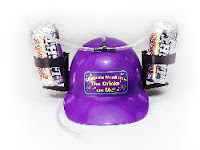 I fashioned these teleprompters after the cameras from that T.V. show where the contestants are fitted with a harness with an attached camera pointed back at themselves as they run through some abandoned building that's supposed to be haunted. I obviously have replaced the camera/floodlight thingy with my "Chatter-prompter", comprised of a clipboard with eloquent words on them and a penlight taped on the front for those dark alleyways. Oh yeah, it also has one of those built in drinking helmets with the hands-free "softdrink holders" on top, with plastic tubing that functions as a straw for the wearer.

"How can eloquent words help the homeless?", you ask.

Look no further than the example of our current president of the United States to see how valuable eloquent words can be. Think of two brothers who share the same genetic code. One has learned the gift of eloquent words, while the other has not. One lives in the White House while the other lives in abject squalor in a cardboard shack outside Nairobi.

I'm hoping to develop this invention further and seek a patent where I make gobs of money. Our president may in fact be interested in the hands-free mobility this device will offer for those unplanned impromptu questions from pesky reporters as he makes his way to the 'copter. I realize I need a catchy marketing message. It is a work in progress, but here's what I have so far:

Give a homeless man a book and he uses it for toilet paper reads for a day. Teach a homeless man to wear the Chatter-prompter with eloquent words, and he just might be your next president!

So far these Chatter-prompters have been well received down at the shelter. Most of the satisfied receipients seem to initially like the drinking helmet with the softdrink holders. I am hopeful that with time, they may learn to actually read, thereby igniting the power behind the eloquent words.

With sincerity and humble herculian humanitarianism,